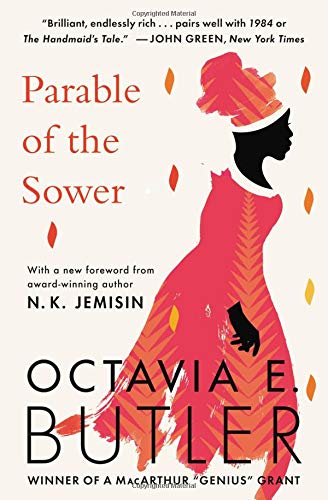 Parable of the Sower

This acclaimed post-apocalyptic novel of hope and terror from an award-winning author "pairs well with 1984 or The Handmaid's Tale" and includes a foreword by N. K. Jemisin (John Green, New York Times).

When global climate change and economic crises lead to social chaos in the early 2020s, California becomes full of dangers, from pervasive water shortage to masses of vagabonds who will do anything to live to see another day. Fifteen-year-old Lauren Olamina lives inside a gated community with her preacher father, family, and neighbors, sheltered from the surrounding anarchy. In a society where any vulnerability is a risk, she suffers from hyperempathy, a debilitating sensitivity to others' emotions.

Precocious and clear-eyed, Lauren must make her voice heard in order to protect her loved ones from the imminent disasters her small community stubbornly ignores. But what begins as a fight for survival soon leads to something much more: the birth of a new faith . . . and a startling vision of human destiny.

"In the ongoing contest over which dystopian classic is most applicable to our time, Octavia Butler's 'Parable' books may be unmatched."―New Yorker

"One of the finest voices in fiction-period . . . A master storyteller, Butler casts an unflinching eye on racism, sexism, poverty, and ignorance and lets the reader see the terror and beauty of human nature."―Washington Post Book World

"If we're talking must-read authors like Maya Angelou, James Baldwin, and Toni Morrison, the one-and-only Octavia Butler needs be a part of the conversation. The groundbreaking sci-fi and speculative fiction author was a master of spinning imaginative tales that introduced you to both the possibilities -- and dangers -- of the human race, all while offering lessons on tribalism, race, gender, and sexuality."―O, The Oprah Magazine

"The story of three generations of Olamina women . . . Most touching in the novel are the friction between generations, the kinds of faith each generation indulges in, and the new families that form when traditional ones are splintered."―Los Angeles Times

OCTAVIA E. BUTLER was a renowned writer who received a MacArthur "Genius" Grant and PEN West Lifetime Achievement Award for her body of work. She was the author of several award-winning novels including Parable of the Sower, which was a New York Times Notable Book of the Year, and was acclaimed for her lean prose, strong protagonists, and social observations in stories that range from the distant past to the far future. Sales of her books have increased enormously since her death as the issues she addressed in her Afrofuturistic, feminist novels and short fiction have only become more relevant. She passed away on February 24, 2006.