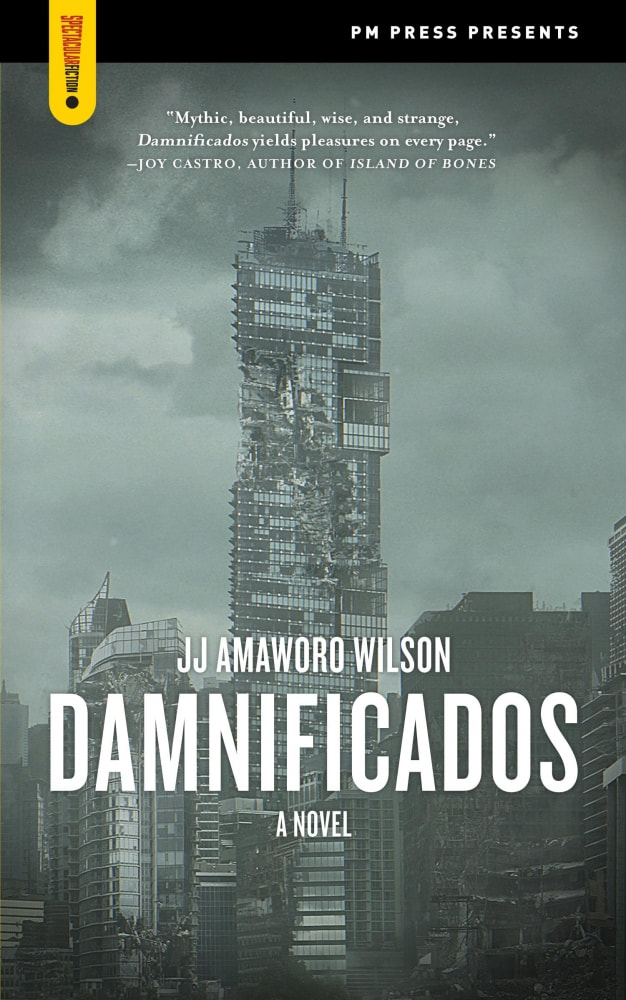 ﻿Damnificados is loosely based on the real-life occupation of a half-completed skyscraper in Caracas, Venezuela, the Tower of David. In this fictional version, six hundred “damnificados”—vagabonds and misfits—take over an abandoned urban tower and set up a community complete with schools, stores, beauty salons, bakeries, and a rag-tag defensive militia. Their always heroic (and often hilarious) struggle for survival and dignity pits them against corrupt police, the brutal military, and the tyrannical “owners.”

Taking place in an unnamed country at an unspecified time, the novel has elements of magical realism: avenging wolves, biblical floods, massacres involving multilingual ghosts, arrow showers falling to the tune of Beethoven’s Ninth, and a trash truck acting as a Trojan horse. The ghosts and miracles woven into the narrative are part of a richly imagined world in which the laws of nature are constantly stretched and the past is always present.

“Should be read by every politician and rich bastard and then force-fed to them—literally, page by page.”

—Jimmy Santiago Baca, author of A Place to Stand

“Two-headed beasts, biblical floods, dragonflies to the rescue—magical realism threads through this authentic and compelling struggle of men and women—the damnificados—to make a home for themselves against all odds. Into this modern, urban, politically familiar landscape of the ‘have-nots’ versus the ‘haves,’ Amaworo Wilson introduces archetypes of hope and redemption that are also deeply familiar—true love, vision quests, the hero’s journey, even the remote possibility of a happy ending. These characters, this place, this dream will stay with you long after you’ve put this book down.”

“Only a rare and special talent can take contemporary realities—sad, joyful, infuriating, inspiring—and spin them into legend. In a narrative rich in danger, adventure, humor, romance, and risk, JJ Amaworo Wilson raises essential questions without succumbing to earnestness or didacticism.”

—Diane Lefer, author of Confessions of a Carnivore

JJ Amaworo Wilson is a German-born, British-educated debut novelist. Based in the U.S., he has lived in 9 countries and visited 60. He is a prizewinning author of over 20 books about language and language learning. Damnificados is his first major fiction work. His short fiction has been published by Penguin, Johns Hopkins University Press, and myriad literary magazines in England and the U.S.