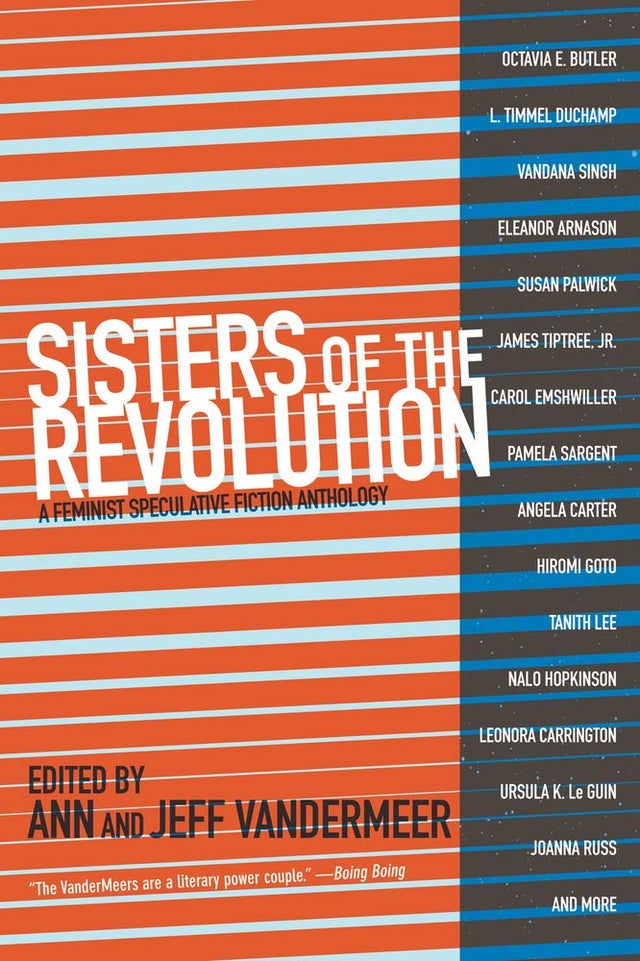 Sisters of the Revolution: A Feminist Speculative Fiction Anthology

Sisters of the Revolution gathers a highly curated selection of feminist speculative fiction (science fiction, fantasy, horror, and more) chosen by one of the most respected editorial teams in speculative literature today, the award-winning Ann and Jeff VanderMeer. Including stories from the 1970s to the present day, the collection seeks to expand the conversation about feminism while engaging the reader in a wealth of imaginative ideas.

From the literary heft of Angela Carter to the searing power of Octavia Butler, Sisters of the Revolution gathers daring examples of speculative fiction's engagement with feminism. Dark, satirical stories such as Eileen Gunn's "Stable Strategies for Middle Management" and the disturbing horror of James Tiptree Jr.'s "The Screwfly Solution" reveal the charged intensity at work in the field. Including new, emerging voices like Nnedi Okorafor and featuring international contributions from Angelica Gorodischer and many more, Sisters of the Revolution seeks to expand the ideas of both contemporary fiction and feminism to new fronts. Moving from the fantastic to the futuristic, the subtle to the surreal, these stories will provoke thoughts and emotions about feminism like no other book available today.

“The VanderMeers are a literary power couple.”

“A very laudable trait of the editors is their egalitarianism, their refusal to distinguish between lowbrow and highbrow, using quality and impact as their only yardsticks.”

The founder of the award-winning Buzzcity Press, Ann VanderMeer currently serves as an acquiring fiction editor for Tor.com, Cheeky Frawg Books, and Weirdfictionreview.com. She was the editor-in-chief for Weird Tales for five years, during which time she was nominated three times for the Hugo Award, winning one. Along with nominations for the Shirley Jackson Award, she also has won a World Fantasy Award and a British Fantasy Award for coediting The Weird: A Compendium of Strange and Dark Stories. Other projects have included Best American Fantasy, three Steampunk anthologies, and a humor book, The Kosher Guide to Imaginary Animals.

A three-time World Fantasy Award winner and 13-time nominee, Jeff VanderMeer has been a finalist for the Nebula, Hugo, Philip K. Dick, and Shirley Jackson Awards. His nonfiction appears in the New York Times Book Review, the Guardian, and the Los Angeles Times, among others. The cofounder of Weirdfictionreview.com and Cheeky Frawg Books, VanderMeer has edited or coedited twelve fiction anthologies and serves as the codirector of Shared Worlds, a unique teen SF/fantasy writing camp located at Wofford College. Jeff’s most recent release is Wonderbook (Abrams Image), the world's first fully illustrated, full-color creative writing guide. In 2014, Farrar, Straus and Giroux will release his Southern Reach trilogy (Annihilation, Authority, and Acceptance). He lives in Tallahassee, Florida, with his wife, the noted editor Ann VanderMeer.