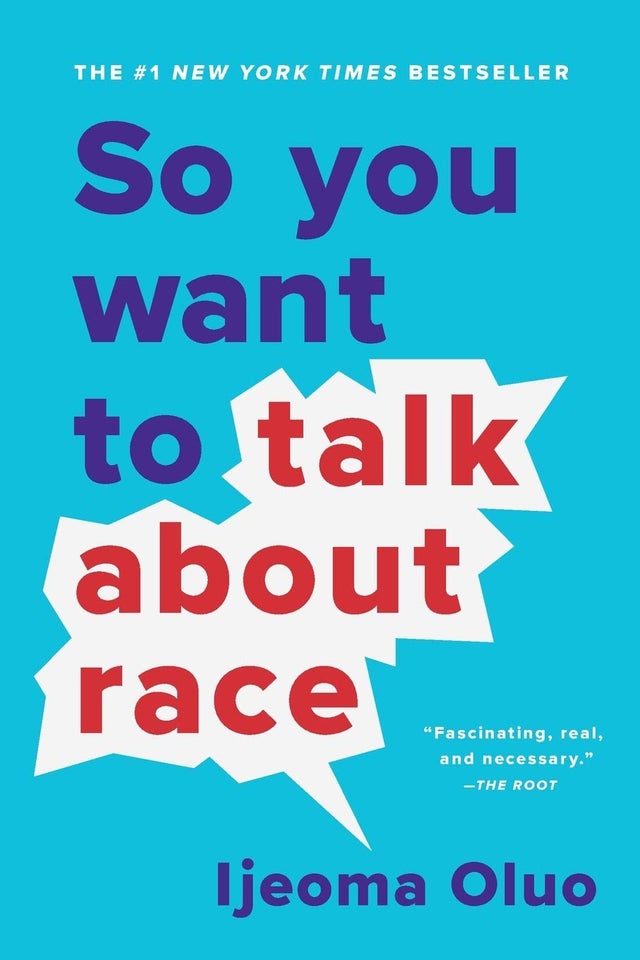 So You Want to Talk About Race

In this New York Times bestseller, Ijeoma Oluo offers a hard-hitting but user-friendly examination of race in America

Widespread reporting on aspects of white supremacy -- from police brutality to the mass incarceration of Black Americans -- has put a media spotlight on racism in our society. Still, it is a difficult subject to talk about. How do you tell your roommate her jokes are racist? Why did your sister-in-law take umbrage when you asked to touch her hair -- and how do you make it right? How do you explain white privilege to your white, privileged friend?

In So You Want to Talk About Race, Ijeoma Oluo guides readers of all races through subjects ranging from intersectionality and affirmative action to "model minorities" in an attempt to make the seemingly impossible possible: honest conversations about race and racism, and how they infect almost every aspect of American life.

"Oluo gives us -- both white people and people of color -- that language to engage in clear, constructive, and confident dialogue with each other about how to deal with racial prejudices and biases." -- National Book Review

"Generous and empathetic, yet usefully blunt . . . it's for anyone who wants to be smarter and more empathetic about matters of race and engage in more productive anti-racist action." -- Salon (Required Reading)

"So You Want To Talk About Race is a landmark book for our times. Oluo does more than deliver tough, blunt truths about the realities of racism, power and oppression. She also, in bracing fashion, offers a vision of hope; a message that through dialogue and struggle, we can emancipate ourselves from what she calls 'the nation's oldest pyramid scheme: white supremacy.' That is why I don't think this is merely one of the most important books of the last decade. It is also one of the most optimistic. To write such a book in these difficult times is in and of itself, a daring and beautiful act."―Dave Zirin, sports editor at The Nation and author of What's My Name, Fool?: Sports and Resistance in the United States

"Ijeoma Oluo's So You Want to Talk About Race is a welcome gift to us all -- a critical offering during a moment when the hard work of social transformation is hampered by the inability of anyone who benefits from systemic racism to reckon with its costs. Oluo's mandate is clear and powerful: change will not come unless we are brave enough to name and remove the many forces at work strangling freedom. Racial supremacy is but one of those forces."

―Darnell L. Moore, author of No Ashes in the Fire

"Simply put: Ijeoma Oluo is a necessary voice and intellectual for these times, and any time, truth be told. Her ability to write so smartly and honestly with strokes of humor about race in America is heaven sent and demonstrates just how desperately we all need to be talking about race, and perhaps, more importantly, this insightful book shows those in power or privilege how they need to listen."―Phoebe Robinson, New York Times bestselling author of You Can't Touch My Hair and Everything's Trash, But It's Okay

"What Ijeoma Oluo has done, and continues to do, is nothing short of revolutionary -- she has created a conversational guide and laid out a movement-building blueprint for people of all races who are invested in self-assessment, open to being challenged, and committed to collective progress. One of the most important voices of our time, Oluo encourages us to be the conversation starters in our own lives and to keep talking -- someone who needs to hear us is listening."―Feminista Jones, author of Reclaiming Our Space

"So You Want to Talk About Race strikes the perfect balance of direct and brutally honest without being preachy or, worse, condescending. Regardless of your comfort level, educational background, or experience when it comes to talking about race, Ijeoma has created a wonderful tool to help broach these conversations and help us work toward a better world for people of color from all walks of life."

―Franchesca Ramsey, host and executive producer of MTV's Decoded and author of Well, That Escalated Quickly

Ijeoma Oluo is the author of the New York Times bestseller So You Want to Talk About Race. Her work on race has been featured in the New York Times and the Washington Post. She has twice been named to the Root 100, and she received the 2018 Feminist Humanist Award from the American Humanist Association. She lives in Seattle, Washington.