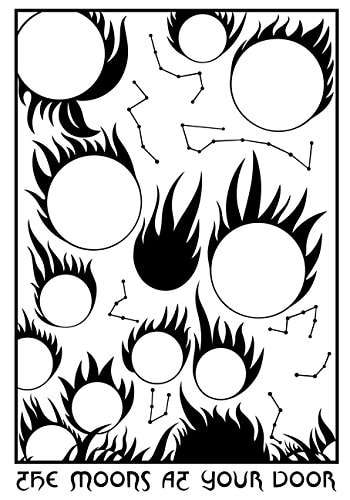 The Moons at Your Door: An Anthology of Hallucinatory Tales

“The stories that I have collected here in The Moons At Your Door continue to enthrall and terrify me. They all spell how close is the darkness, how bubbly and slyly it may seep into our lives and change them utterly.” —David Tibet (from the introduction)

This fantastic anthology of strange fiction and hallucinatory tales collects chilling stories by many innovators of the weird, while drawing attention to little-known, and shamefully underrepresented or forgotten, scribes of the macabre.

The Moons At Your Door collects over 30 tales, both familiar and unknown from

Founder of the long running cult band Current 93, David Tibet is widely known as an artist and songwriter. His song cycles present a rich vein of ethereal imagery, arcane reference, and the supernatural, creating their own sound-worlds of heartfelt and mysterious poignancy.

The book's cover and frontispiece features artwork by Tibet.