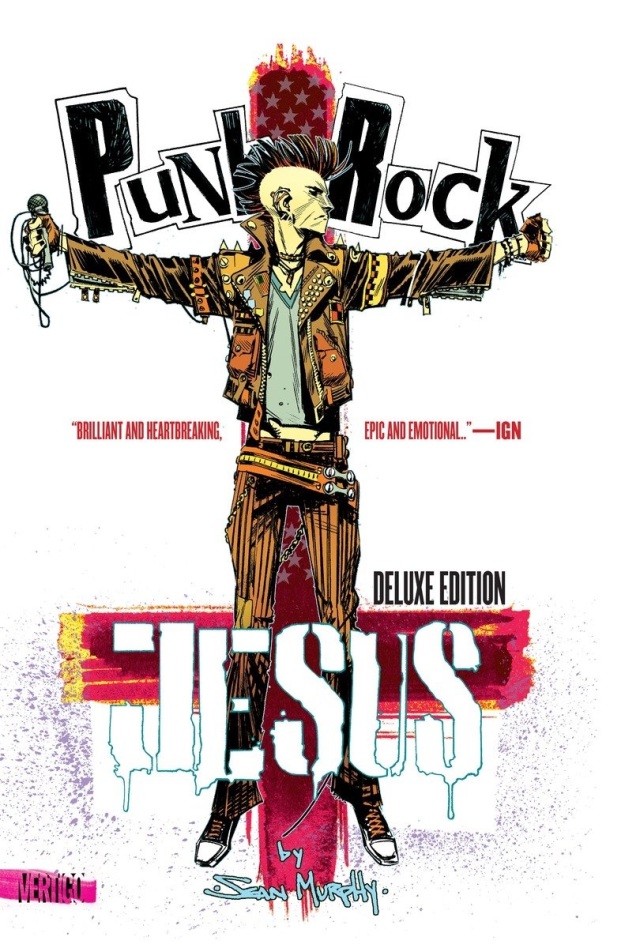 A reality TV show starring a clone of Jesus Christ causes chaos across the U.S. of the near future in PUNK ROCK JESUS, a new graphic novel written and drawn by Sean Murphy, the acclaimed illustrator of JOE THE BARBARIAN and AMERICAN VAMPIRE. J2 causes both outrage and adulation. Religious zealots either love or hate the show, angry politicians worry about its influence on the nation, and members of the scientific community fear the implications of cloning a human being at all, let alone the Son of God.

Thomas McKael is the clones's bodyguard and former IRA operative, who despite his turbulent past is hired to protect the new Jesus--a baby who captivates the world, but grows up to become an angry teenager.

When falling ratings force the network to cut Jesus's mother from the series the young star runs away, renounces his religious heritage and forms a punk rock band. And what starts off as babysitting for Thomas becomes an epic battle, as Jesus goes to war against the corporate media complex that created him.

Reviews: "Murphy has constructed a compelling, searching, and important tale that embraces some of the biggest questions of our day, and he does so using incredibly energetic art with dynamic, elastic compositional approaches."--Publishers Weekly Starred Review

"Punk Rock Jesus is amazing. The series has been incredible right from the beginning and it ends in a spectacular fashion. It's brilliant and heartbreaking, epic and emotional.... This is book that makes you think. If you haven't been reading Punk Rock Jesus, you owe it yourself to pick up the collected addition when it releases this spring. Don't miss one of the best series of 2012."--IGN

"Sean's work is flawless....Punk Rock Jesus is the best kind of scifi--a meditation on liberty for the cyber-age."--Popmatters

After breaking into the industry at a young age, Sean Murphy made a name for himself in the world of indie comics before joining up with DC. In his tenure, he has worked on such titles as BATMAN/SCARECROW: YEAR ONE, TEEN TITANS, HELLBLAZER, JOE THE BARBARIAN and the miniseries AMERICAN VAMPIRE: SURVIVAL OF THE FITTEST. Sean also wrote and illustrated the original graphic novel Off Road, as well as his recent popular miniseries, PUNK ROCK JESUS. Currently, he can be seen working as the artist on the critically acclaimed Vertigo miniseries, THE WAKE, with Scott Snyder.