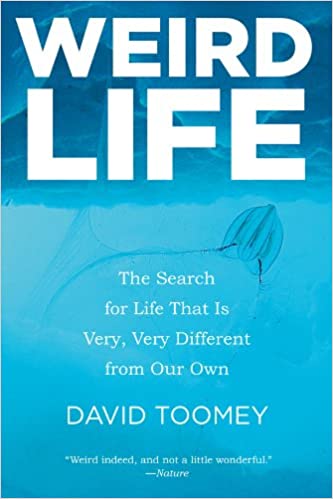 “Weird indeed, and not a little wonderful.”―Nature

In the 1980s and 1990s, in places where no one thought it possible, scientists found organisms they called extremophiles: lovers of extremes. There were bacteria in volcanic hydrothermal vents on the ocean floor, single-celled algae in Antarctic ice floes, and fungi in the cooling pools of nuclear reactors.

But might there be life stranger than the most extreme extremophile? Might there be, somewhere, another kind of life entirely? In fact, scientists have hypothesized life that uses ammonia instead of water, life based not in carbon but in silicon, life driven by nuclear chemistry, and life whose very atoms are unlike those in life we know. In recent years some scientists have begun to look for the tamer versions of such life on rock surfaces in the American Southwest, in a “shadow biosphere” that might impinge on the known biosphere, and even deep within human tissue. They have also hypothesized more radical versions that might survive in Martian permafrost, in the cold ethylene lakes on Saturn’s moon Titan, and in the hydrogen-rich atmospheres of giant planets in other solar systems. And they have imagined it in places off those worlds: the exotic ices in comets, the vast spaces between the stars, and―strangest of all―parallel universes.

Distilling complex science in clear and lively prose, David Toomey illuminates the research of the biological avant-garde and describes the workings of weird organisms in riveting detail. His chapters feature an unforgettable cast of brilliant scientists and cover everything from problems with our definitions of life to the possibility of intelligent weird life. With wit and understanding that will delight scientists and lay readers alike, Toomey reveals how our current knowledge of life forms may account for only a tiny fraction of what’s really out there.

“A breakneck tour through natural history, encounters of an impossible kind, researchers as weird as the organisms they pursue that leads the reader to wonder where science ends and fantasy begins.”

“Conveys these far-out theories with precision and humor.”

“Toomey is calm and clear-eyed. . . . A good man to have watching the skies, and the ocean floor.”

“Starred review. An ingenious overview of anything that might be alive.”

AuthorDavid Toomey is a professor of English and director of the Professional Writing and Technical Communication Program at the University of Massachusetts-Amherst. He lives in Amherst.