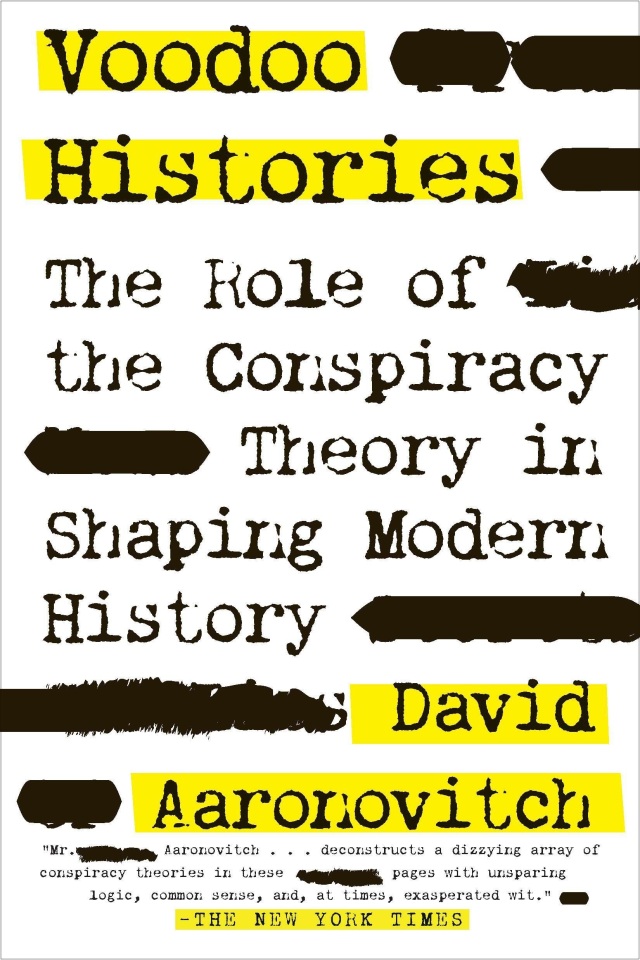 Voodoo Histories: The Role of the Conspiracy Theory in Shaping Modern History

"Meticulous in its research, forensic in its reasoning, robust in its argument, and often hilarious in its debunking... a highly entertaining rumble with the century's major conspiracy theorists and their theories." --John Lahr, National Book Critics Circle Award-winning author of Tennessee Williams

From an award-winning journalist, a history so funny, so true, so scary, it's bound to be called a conspiracy. Our age is obsessed by the idea of conspiracy. We see it everywhere- from Pearl Harbor to 9/11, from the assassination of Kennedy to the death of Diana. In this age of terrorism we live in, the role of conspiracy is a serious one, one that can fuel radical or fringe elements to violence.

For David Aaronovitch, there came a time when he started to see a pattern among these inflammatory theories. these theories used similarly murky methods with which to insinuate their claims: they linked themselves to the supposed conspiracies of the past (it happened then so it can happen now); they carefully manipulated their evidence to hide its holes; they relied on the authority of dubious academic sources. Most important, they elevated their believers to membership of an elite -- a group of people able to see beyond lies to a higher reality. But why believe something that entails stretching the bounds of probability so far?

In this entertaining and enlightening book, he examines why people believe conspiracy theories, and makes an argument for a true skepticism: one based on a thorough knowledge of history and a strong dose of common sense.

"Lively...In most cases, Mr. Aaronovitch notes, conspiracy theorists would rather tie themselves into complicated knots and postulate all sorts of improbable secret connections than accept a simple, more obvious explanation." -- The New York Times

"Every reader will have his favorite crank." -- The New York Times Book Review

"Terrifying, hilarious, irreverent and addictively compelling, Voodoo Histories is an instant classic that should be read by everyone -- a brilliant, witty and devastating analysis of, and guide to, the big lies of modern history by our most brilliant commentator" - Simon Sebag Montefiore, author of Young Stalin and Stalin: The Court Of The Red Tsar

"A brilliant, sparkling and witty demolition of numerous conspiracy theories --not only dotty but sometimes, as in the case of the fabricated Protocols of the Elders of Zion‚ highly dangerous and an analysis of why otherwise intelligent people are so ready to believe in them" - Ian Kershaw, author of Hitler and To Hell and Back

David Aaronovitch is an award-winning journalist, who has worked in radio, television and newspapers in the United Kingdom since the early 1980s. His first book, Paddling to Jerusalem, won the Madoc prize for travel literature in 2001. He is also the recipient of the George Orwell Prize for political journalism. He writes a regular column for The Times (UK). He lives in north London, with his wife and three daughters.