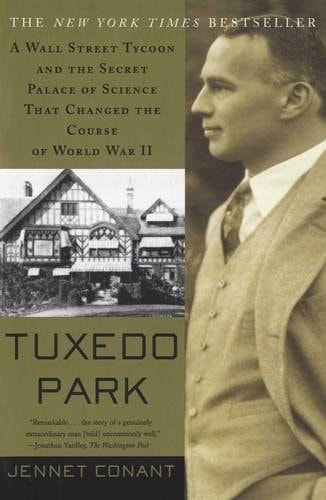 Tuxedo Park : A Wall Street Tycoon and the Secret Palace of Science That Changed the Course of World War II

The untold story of an eccentric Wall Street tycoon and the circle of scientific geniuses he assembled before World War II to develop the science for radar and the atomic bomb. Together they changed the course of history. Legendary financier, philanthropist, and society figure Alfred Lee Loomis gathered the most visionary scientific minds of the twentieth century—Albert Einstein, Werner Heisenberg, Niels Bohr, Enrico Fermi, and others—at his state-of-the-art laboratory in Tuxedo Park, New York, in the late 1930s. He established a top-secret defense laboratory at MIT and personally bankrolled pioneering research into new, high-powered radar detection systems that helped defeat the German Air Force and U-boats. With Ernest Lawrence, the Nobel Prize-winning physicist, he pushed Franklin Delano Roosevelt to fund research in nuclear fission, which led to the development of the atomic bomb.

Jennet Conant, the granddaughter of James Bryant Conant, one of the leading scientific advisers of World War II, enjoyed unprecedented access to Loomis's papers, as well as to people intimately involved in his life and work. She pierces through Loomis's obsessive secrecy and illuminates his role in assuring the Allied victory.

Kurt Vonnegut "A brilliant account of the all but vanished reputation of an amateur physicist who became a friend and peer of the greatest scientists of his time."

Timothy Ferris "Jennet Conant's Tuxedo Park illuminates an important but little-known chapter in American science, and does it with a deft, knowing touch that brings it to life."

The Washington Post Book World "The story of how radar made its passage from the drawing board into the cockpits of Allied fighter planes is incredibly dramatic, and Jennet Conant tells it uncommonly well."

The Wall Street Journal "Understanding just how America wins wars is a pressing task these days, which makes the story of Alfred Loomis especially timely -- and instructive....His remarkable story is being told now only thanks to Ms. Conant, a journalist who combines a graceful writing style with her own family connections to his secretive life."

Author Jennet Conant is the author of Man of the Hour: James B. Conant, Warrior Scientist and the New York Times bestsellers The Irregulars: Roald Dahl and the British Spy Ring in Wartime Washington‚ and Tuxedo Park: A Wall Street Tycoon and the Secret Palace of Science That Changed the Course of World War II. She has written for Vanity Fair, Esquire, GQ, Newsweek, and The New York Times. She lives in New York City and Sag Harbor, New York.