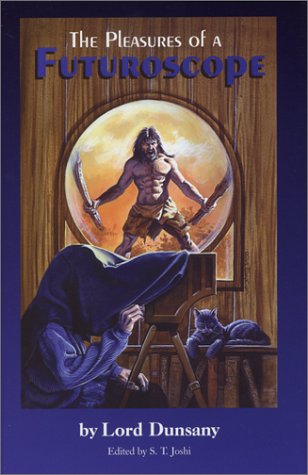 The Pleasures of a Futuroscope

Lord Dunsany, Irish master of fantasy, was the author of more than a dozen novels, hundreds of short stories, poems, and essays, and dozens of plays. And yet, his last major work, The Pleasures of a Futuroscope, has remained unpublished until this edition. In this powerful and moving novel, written in 1955, a futuroscope--a device that allows a viewer to see into the near or distant future--reveals an awful fate for humanity: a nuclear holocaust has destroyed nearly all human life on the planet. The great city of London is now merely an immense crater, filled in with water from the Thames. The pitiful remnants of humanity have been reduced to a Stone Age existence. The narrator, obsessively looking through the futuroscope, focuses upon the plight of a single family in their struggles to survive and fend off the many enemies, both animal and human, that surround them. When one of their number is kidnapped by a band of gypsies, we can only wonder at her fate in this brave new world of the distant future. Gripping, horrifying, touching, and fascinating, The Pleasures of a Futuroscope shows that Lord Dunsany retained his literary powers undiminished to the end of his life.

"Apparently written in 1955, this last novel by Irish fantasist Dunsany (1878-1955) doesn't rank with such early masterpieces as The King of Elfland's Daughter, but it offers its own rewards. Methery, the inventor of the futuroscope, a device that allows one to view the future, first appeared in one of Dunsany's Jorkens stories, "The Two-Way War." Here the unnamed narrator, a retired English journalist, borrows Methery's futuroscope simply for fun, as the title suggests. In a set-up that anticipates today's "reality" TV, the narrator watches a family 500 years in the future as they cope with the aftermath of a nuclear strike on London, regularly noting his breaks in the present for dinner, teatime and bedtime. Dunsany's descriptions of sylvan beauty are as lovely as anything he ever wrote, but some readers may find the elegant exposition, with its long paragraphs and sparse dialogue, too old-fashioned. This restrained apocalyptic novel, warning of the dangers of technology, will likely win over only established fans. Joshi's illuminating introduction is a plus." - Publisher's Weekly

Lord Dunsany (1878-1957) was Edward John Moreton Drax Plunkett, the eighteenth baron of an ancient line. He hunted lions in Africa, taught English in Athens, fought in the Boer and Kaiserian wars, and was wounded in the service of his country. As senior peer of Ireland, he saw three sovereigns crowned at Westminster; part of the renaissance of Irish drama, he hobnobbed with Yeats and Synge and Lady Gregory during the great days of Dublin’s Abbey Theatre. He was peer, sportsman, soldier, playwright, globe-trotter, and once chess champion of Ireland, Scotland, and Wales. He wrote more than sixty books before his death in 1957 and influenced some of the greatest writers of our time.