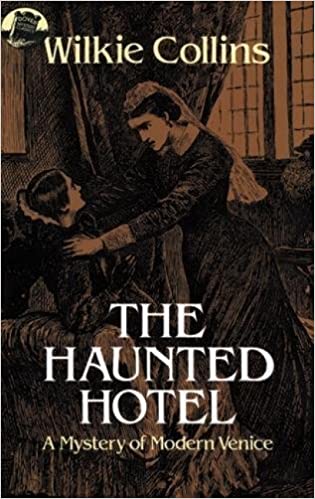 Set amid the picturesque palaces and waterways of 19th-century Venice, this suspenseful novelette recounts an obsessed countess's attempts to thwart what she perceives as her fatal destiny.

Like Poe before him and Conan Doyle after, Wilkie Collins shifted easily from rational domains to the "superrational." Like them, he is famed for original contributions to "ratiocinative" (detective) literature, but often preferred to indulge his occult predilection -- a lifelong indulgence. His first published story, "The Last Stage Coachmen" (1843), was a supernatural allegory of trains; perhaps his last lucid effort (before ill health and opium drained his powers) was this short novel, The Haunted Hotel.

Collins' methods and themes, developed and elaborated in his earlier, massive novels, are streamlined and concentrated here into a tight novelette. The same relentless pace and narrative power, the same attention to plot and backdrop detail that distinguish The Moonstone and The Woman in White are evident here, as is the obsession with destiny and the willful struggle against it.

Collins' much-loved Venice provides the scenery and fatal beauty, the grim waterways and palaces the author will haunt with mysterious women, grotesques, and bloody conspiracies. The Countess Narona is one of Collins' cosmopolitan enchantresses; she acts, but as the tool of her doom. T. S. Eliot wrote, "The principal character, the fatal woman, is herself obsessed by the idea of fatality; her motives are melodramatic; she therefore compels the coincidences to occur, feeling that she is compelled to compel them." Collins relieves the tension with some wry characterizations and ironies; the theatrics are sustained. Indeed, theatrical motifs figure heavily, Collins himself being much involved with the stage at that period.

The Haunted Hotel appears to be loosely based on a case from the annals of French crime; the scene, scenery, players and conflicts, and especially the horror, come straight from Collins' overstimulated, no doubt overwrought, most certainly haunted imagination.

A prolific author of the Victorian era, Wilkie Collins (1824-89) wrote "sensation" novels. The forerunners of today's detective and suspense fiction, his best-known works include The Moonstone and The Woman in White. Charles Dickens was his lifelong friend and collaborator, and many of Collins' stories first appeared in Dickens' weekly publication, All the Year Round.