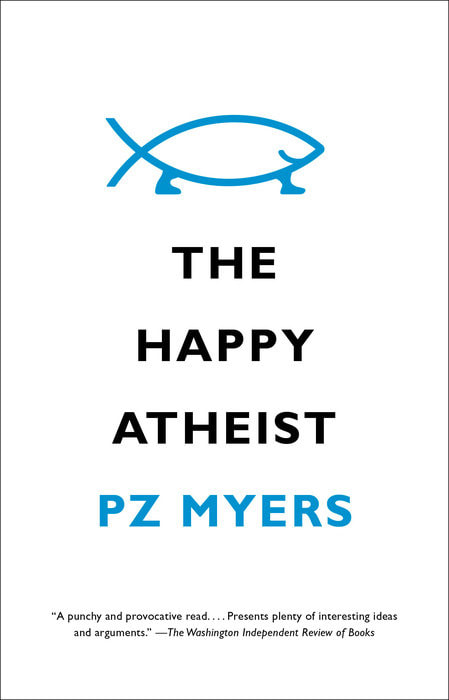 On his popular science blog, Pharyngula, PZ Myers has entertained millions of readers with his infectious love of evolutionary science and his equally infectious disdain for creationism, biblical literalism, intelligent design theory, and other products of godly illogic. This funny and fearless book collects and expands on some of his most popular writings, giving the religious fanaticism of our times the gleeful disrespect it deserves by skewering the apocalyptic fantasies, magical thinking, hypocrisies, and pseudoscientific theories advanced by religious fundamentalists of all stripes. Forceful and articulate, scathing and funny, The Happy Atheist is a reaffirmation of the revelatory power of humor and the truth-revealing powers of science and reason.

“Punchy. . . . Written in accessible, informal style, [Myers] lashes out at the Catholic Church for its sexual-abuse scandals, at the faulty science employed by anti-abortion activists, and at proponents of intelligent design. . . . Myers is able to deftly present serious scientific and philosophical counterarguments to belief in God, but he also acknowledges the necessity of humor—of fighting fire with fire: after all, ‘religions sure do promote some goofy stuff.’ Effectively kick[s] the legs out from beneath the wobbly logic that undergirds religious thought.”

“PZ Myers sets himself apart from the rest of the New Atheist authors by talking, not just about the bigger picture of God, but about religion as all of us experience it on a daily basis. Yes, he tackles the philosophers and theologians, but he also reserves energy to take on casual believers and the myths we come across every day. Nothing—not Communion, not the Holy Spirit, not even death—is too sacred to dissect. And that’s what he does, dismantling religious clichés with ease, making you reconsider all those ideas you grew up with (and may still hold). If you’re still religious after reading this book, you didn’t read it carefully enough."

—Hemant Mehta, author of The Young Atheist’s Survival Guide and blogger at FriendlyAtheist.com

—David Niose, Author of Nonbeliever Nation: The Rise of Secular Americans and President of the Secular Coalition for America

PZ Myers is a professor of biology at the University of Minnesota, Morris. He was named Humanist of the Year in 2009 by the American Humanist Association and received the International Humanist Award in 2011 from the International Humanist and Ethical Union. He has lectured throughout the world on biology, evolution, atheism, and skepticism. His blog, Pharyngula, was named the Best Expert Blog by the Koufax Awards in 2005 and the Best Science Blog by the Weblog Awards in 2006. In 2006, the journal Nature listed Pharyngula as the top-ranked blog by a scientist.