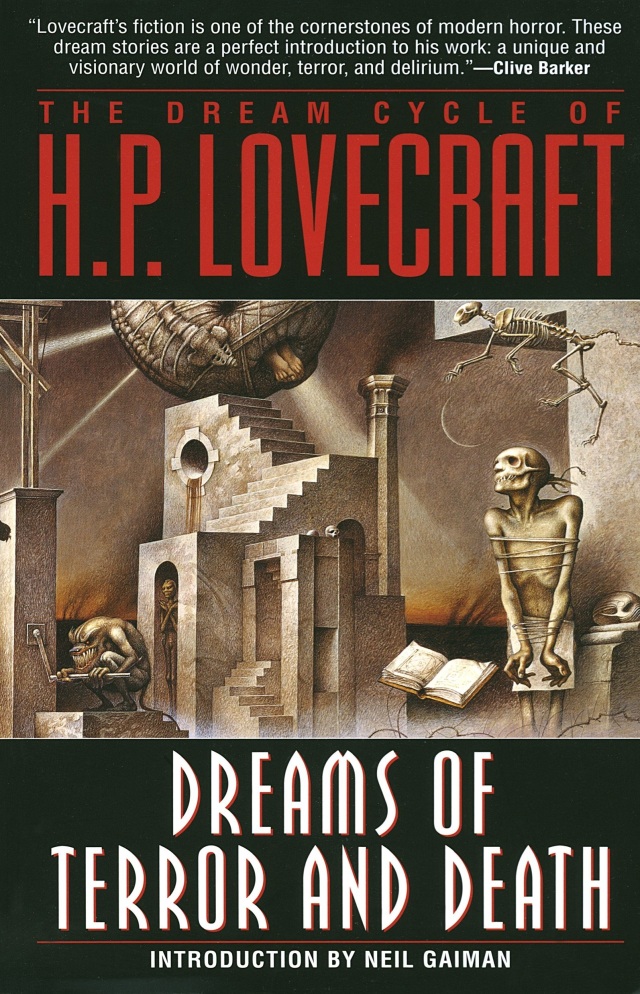 Dreams of Terror and Death: The Dream Cycle of H. P. Lovecraft

“[Lovecraft’s] dream fantasy works are as terrifying and haunting as his tales of horror and the macabre. A master craftsman, Lovecraft brings compelling visions of nightmarish fear, invisible worlds and the demons of the unconscious. If one author truly represents the very best in American literary horror, it is H. P. Lovecraft.”—John Carpenter, Director of At the Mouth of Madness, Halloween, and Christine

With an introduction by Neil Gaiman

This volume collects, for the first time, the entire Dream Cycle created by H. P. Lovecraft, the master of twentieth-century horror, including some of his most fantastic tales:

The Doom That Came to Sarnath—Hate, genocide, and a deadly curse consume the land of Mnar.

The Statment of Randolph Carter—“You fool, Warren is DEAD!”

The Nameless City—Death lies beneath the shifting sands, in a story linking the Dream Cycle with the legendary Cthulhu Mythos.

The Cats of Ulthar—In Ulthar, no man may kill a cat…and woe unto any who tries.

Del Rey has reprinted Lovecraft's stories in three trade paperbacks. This second volume, 25 tales in all, collects the classic "Case of Charles Dexter Ward," the phantasmagoric novel "The Dream-Quest of Unknown Kadath," several fantasies inspired by Lord Dunsany and other stories. Introduction by Neil Gaiman (author of the comics).

"Horror master Lovecraft (1890-1937) frequently used dreams in his tales of the supernatural to evoke fantastic worlds inconceivable to the conscious mind. This repackaging of 25 stories and fragments calls attention to that aspect of Lovecraft's work, but it won't convince anyone that the selections form a coherent cycle. . . this book is a welcome tribute to a writer whose dreams inspired some of this century's finest literary nightmares." — Publishers Weekly

"For the first time, the entire Dream Cycle creation is collected into a single volume: stories of hate and death packed into a title which is an excellent Lovecraft volume. Both newcomers and prior fans will find this a fine gathering, though it's the Lovecraft enthusiast who will have the most appreciation for the editorial work which went into this gathering." — Midwest Book Review

Author Almost completely ignored by the mainstream press during his lifetime, H. P. Lovecraft¨‚has since come to be recognized as one of the greatest writers of classic horror, on a par with Edgar Allan Poe, Lovecraft's mentor. H. P. Lovecraft's work has been translated into more than a dozen languages, his tales adapted for film, television, and comic books, and he has been the subject of more scholarly study than any other writer of horror fiction save Poe.

Neil Gaiman used to be a journalist, but gave it all up to write comics, which he claims are a totally valid late-twentieth-century art form, and he's even won awards for them, so that's all right. He's 5'11" tall, owns a number of black T-shirts, and although he's not overly keen on banana daiquiris, is always very flattered when appreciative fans send him money (he's read Terry Pratchett's biography, and, although he doubts that this will have any effect, figures what the hell).