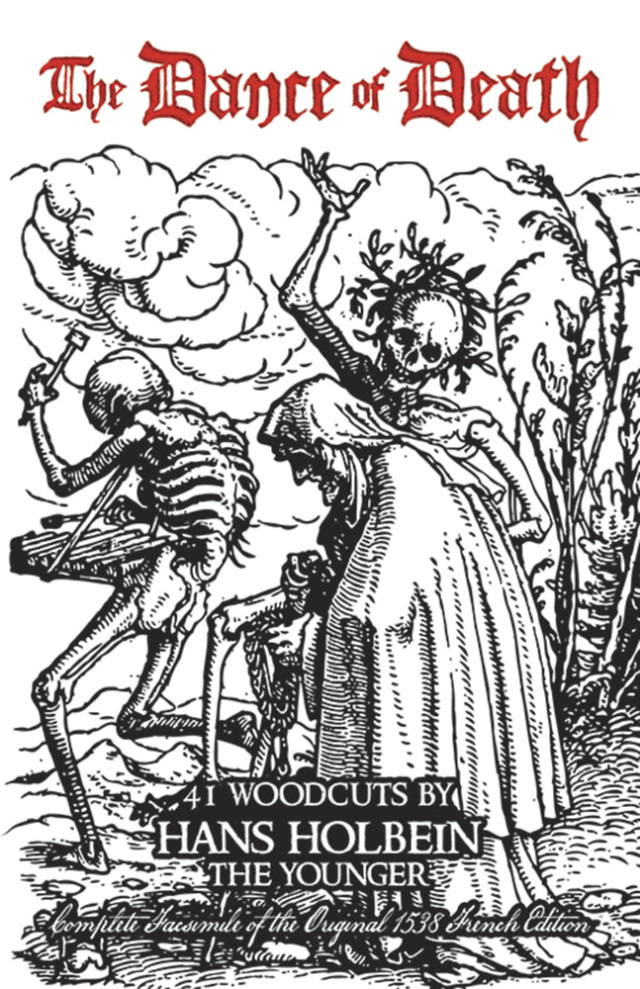 The Dance of Death

Hans Holbein the Younger (1497–1543), remembered today for his insightful portraits, was better known in his own time for his varied and extensive graphic works, the most celebrated of which was The Dance of Death. This work, from the woodblocks of collaborator Hans Lützelburger, was first published in book form in 1538.

The theme of the dance of death was a popular one of the sixteenth century. Holbein captured the feeling of death, the leveler, in its attack on all classes, both sexes, and all ages. A stylized skeleton seizes the child from his mother's breast. The skeleton snatches, plays, tugs, and cavorts throughout the rest of the book. The king, emperor, pope, and cardinal must cease from their functions. The skull is thrust into the face of the astrologer. The hourglass runs out onto the floor. Countess, nun, sailor, peddler, senator are all stopped by the common force. Forty-one finely cut, highly detailed woodcuts capture the single motif, Memento mori: "Remember, you will die." Although the theme is common, the variety of expressions, social groups, backgrounds, styles of dress and architecture, and calls to death are so varied that each one is unique in its power.

This edition, reprinting the unabridged 1538 edition, is the first in a series reprinting great rare books from the Rosenwald Collection. Besides the woodcuts, the book contains a prefatory letter by Jean de Vauzéle and various quotations, depictions, and meditations on death, deaths of men, and the necessity of death. A repeated series of the 41 woodblocks follows the reprinted work and contains English translations of the quotations and verses. Art historians and social historians will find this to be one of the best depictions of class life caught at its fateful moment. The collector will find this to be the finest reproduction of one of Holbein's major works.