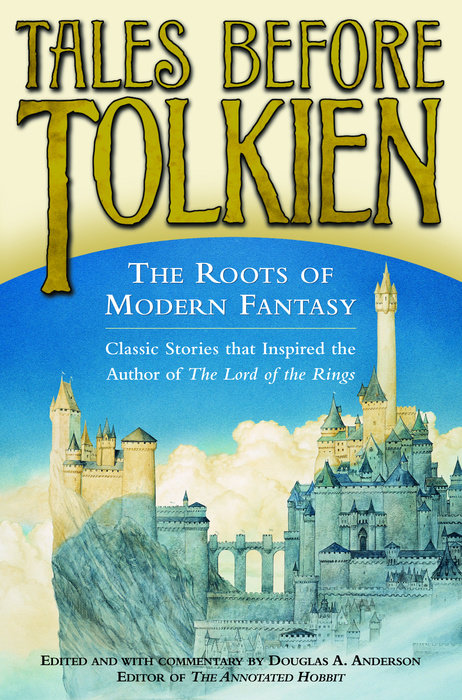 Tales Before Tolkien: The Roots of Modern Fantasy

Terry Brooks. David Eddings. George R. R. Martin. Robin Hobb. The top names in modern fantasy all acknowledge J. R. R. Tolkien as their role model, the author whose work inspired them to create their own epics. But what writers influenced Tolkien himself? Here, internationally recognized Tolkien expert Douglas A. Anderson has gathered the fiction of authors who sparked Tolkien's imagination in a collection destined to become a classic in its own right.

Andrew Lang's romantic swashbuckler, “The Story of Sigurd” features magic rings, an enchanted sword, and a brave hero loved by two beautiful women, and cursed by a ferocious dragon. Tolkien read E. A. Wyke-Smith's “The Marvelous Land of Snergs” to his children, delighting in these charming tales of a pixieish people, only slightly taller than the average table. Also appearing in this collection is a never-before-published gem by David Lindsay, author of Voyage to Arcturus, a novel which Tolkien praised highly both as a thriller and as a work of philosophy, religion, and morals.

In stories packed with magical journeys, conflicted heroes, and terrible beasts, this extraordinary volume is one that no fan of fantasy or Tolkien should be without. These tales just might inspire a new generation of creative writers.

“The Elves” by Ludwig Tieck

“The Golden Key” by George Macdonald

“The Griffin and the Minor Canon” by Frank R. Stockton

“The Demon Pope” by Richard Garnett

“The Story of Sigurd” by Andrew Lang

“The Folk of the Mountain Door” by William Morris

“The Dragon Tamers” by E. Nesbit

“The Far Islands” by John Buchan

“The Drawn Arrow” by Clemence Housman

“Chu-bu and Sheemish” by Lord Dunsany

“The Regent of the North” by Kenneth Morris

“The Coming of the Terror” by Arthur Machen

“The Elf Trap” by Francis Stevens

“The Thin Queen of Elfhame” by James Branch Cabell

“The Woman of the Wood” by A. Merritt

“The Story of Alwina” by Austin Tappan Wright

“A Christmas Play” by David Lindsay