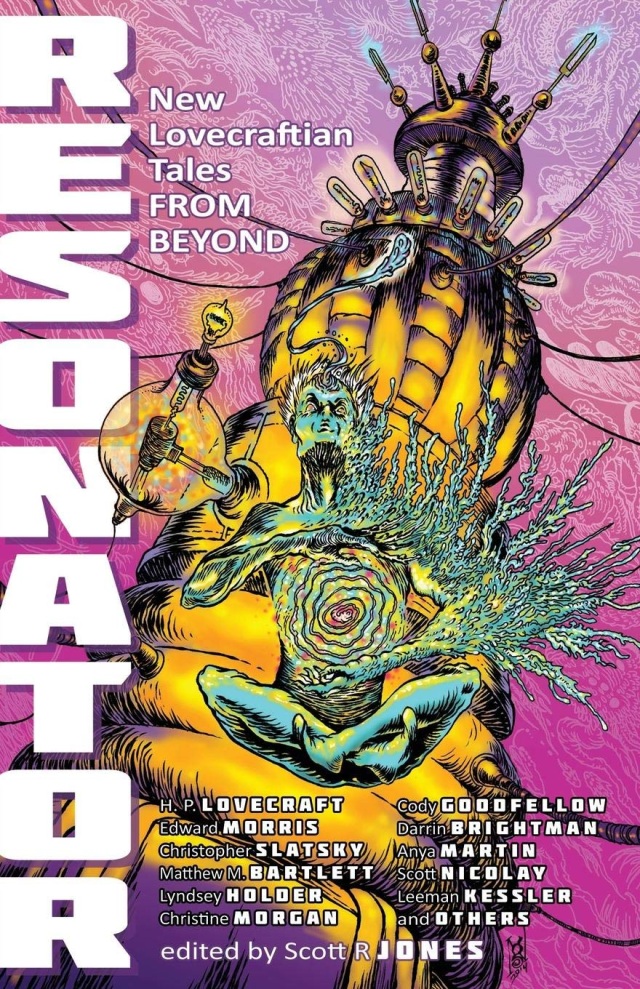 Resonator: New Lovecraftian Tales From Beyond

“With five feeble senses we pretend to comprehend the boundlessly complex cosmos, yet other beings with a wider, stronger, or different range of senses might not only see very differently the things we see, but might see and study whole worlds of matter, energy, and life which lie close at hand ... I have always believed that such strange, inaccessible worlds exist at our very elbows, and now I believe I have found a way to break down the barriers!” –H. P. Lovecraft, “From Beyond” (1920)

Dramatically, to camera: “It ate him ... bit off his head ... like a gingerbread man!” –Jeffrey Combs as Crawford Tillinghast in Stuart Gordon's From Beyond (1986)

In his classic story “From Beyond,” Howard Phillips Lovecraft introduced the “Tillinghast Resonator:” a monstrous device that stimulates dormant senses in man, opens up unseen worlds to unsuspecting eyes, and calls through terror and ecstasy from a realm far beyond our mundane perceptions.

In RESONATOR: New Lovecraftian Tales From Beyond, you'll meet the men and women who dare to pull the switch, for profit, pleasure, and ultimately, peril! Thrill to the creatures (both mindless and horribly sentient) that are revealed in wave after wave of uncanny radiation! Turn on the juice, brace your pineal gland for some unprecedented growth, and get ready to go BEYOND!

Editor Scott R. Jones brings you stories from some of the best writers working in Weird Fiction today (Cody Goodfellow, Matthew Bartlett, Scott Nicolay, Christopher Slatsky, Christine Morgan, Richard Lee Byers, Orrin Grey, Anya Martin, and Edward Morris) as well as fresh new voices. With a cover featuring the psychedelic art of Nick 'The Hat' Gucker, RESONATOR: New Lovecraftian Tales From Beyond is the anthology that will break down the barriers!