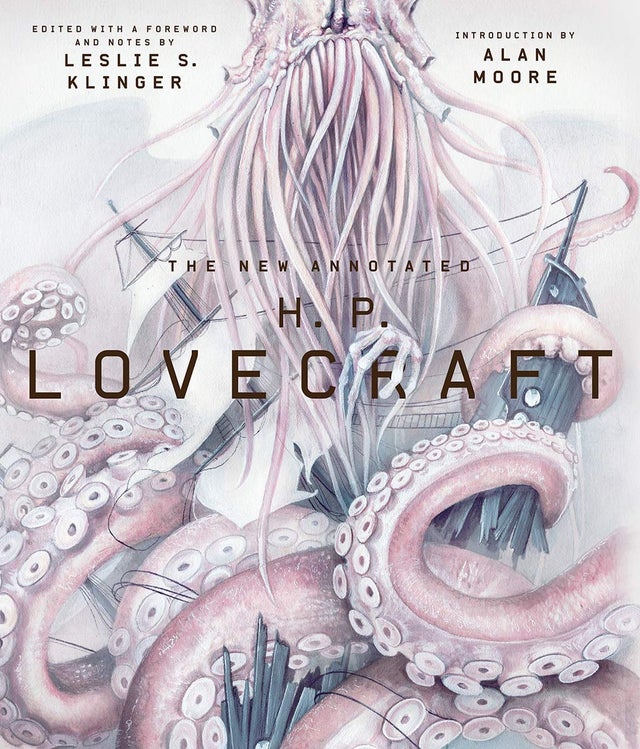 Finalist for the HWA's Bram Stoker Award for Best Anthology

From across strange aeons comes the long-awaited annotated edition of "the twentieth century's greatest practitioner of the classic horror tale" (Stephen King). "With an increasing distance from the twentieth century, the New England poet, author, essayist, and stunningly profuse epistolary Howard Phillips Lovecraft is beginning to emerge as one of that tumultuous period's most critically fascinating and yet enigmatic figures," writes Alan Moore in his introduction to The New Annotated H. P. Lovecraft.

In this massive volume, Leslie S. Klinger reanimates Lovecraft with clarity and historical insight, charting the rise of the erstwhile pulp writer, whose rediscovery and reclamation into the literary canon can be compared only to that of Poe or Melville. Weaving together a broad base of existing scholarship with his own original insights, Klinger appends Lovecraft's uncanny oeuvre and Kafkaesque life story in a way that provides context and unlocks many of the secrets of his often cryptic body of work. One of the progenitors of "weird fiction," Lovecraft wrote stories suggesting that we share not just our reality but our planet, and even a common ancestry, with unspeakable, godlike creatures just one accidental revelation away from emerging from their epoch of hibernation and extinguishing both our individual sanity and entire civilization.

Following his best-selling The New Annotated Sherlock Holmes, Leslie S. Klinger collects here twenty-two of Lovecraft's best, most chilling "Arkham" tales, including "The Call of Cthulhu," At the Mountains of Madness, "The Whisperer in Darkness," "The Shadow Over Innsmouth," "The Colour Out of Space," and others. With nearly 300 illustrations, including full-color reproductions of the original artwork and covers from Weird Tales and Astounding Stories, and more than 1,000 annotations, this volume illuminates every dimension of H. P. Lovecraft and stirs the Great Old Ones in their millennia of sleep. 280 color illustrations

"H(oward) P(hillips) Lovecraft (1890-1937) posthumously earned a reputation for outstanding short story writing in the horror genre. The irony is that, during his lifetime, he appeared in print only in the so-called pulp magazines and appreciation for his work was modest. But as expressed in Alan Moore's on-target introduction here, in the years following Lovecraft's death, the "mesmerizing power of his language and imagination" gained him a wider and more enthusiastic readership than he would have ever imagined for himself. The foreword by Leslie S. Klinger is a highly informative history of the horror genre and a trenchant summary of Lovecraft's life, all of which preface the primary section of this giant book, a presentation of twenty-two of Lovecraft's most significant stories, each fully annotated with identifications of people and places, definitions of unfamiliar vocabulary, and background explanations of mentioned literary works. This impressive book can be used two ways, either for checkout in circulating horror collections or for in-house-only reference." --Brad Hooper

"Annotator Les Klinger is the man you want to have by your side, as you explore the Lovecraftian Darkness." - Neil Gaiman

"The New Annotated H. P. Lovecraft, with its astonishingly informed and detailed notes and photographs, edited by Leslie S. Klinger, is a treasure trove for Lovecraft readers, for whom it will be an essential purchase. A pleasure to peruse, encyclopediac in its information, and deeply sympathetic with its subject" - Joyce Carol Oates

"I am utterly gobsmacked. The New Annotated H. P. Lovecraft is a work of such readability, easy access, precision, and joy that its publication by Liveright is an Olympian landmark of modern gothic literature." - Harlan Ellison

"Where does a reader longing to know more about Lovecraft's fiction and philosophy begin when faced with the dozens of critical and interpretative studies and biographies? Thanks to the devoted work of Leslie S. Klinger, an excellent starting point is his The New Annotated H.P. Lovecraft. Klinger has again created a serious work of research and scholarship that is shamelessly intended for fans, and is a joy to read. An absolute essential addition to all horror fiction collections." - Alan Cranis, Bookgasm.com

Author H. P. Lovecraft (1890 -1937) is regarded as the leading twentieth-century American author of supernatural fiction. Leslie S. Klinger is the editor of numerous books, including the best-selling The New Annotated Sherlock Holmes, The New Annotated Dracula, and The New Annotated H. P. Lovecraft. He lives in Malibu, California. Alan Moore is a magician and performer, and is widely regarded as the best and most influential writer in the history of comics. His seminal works include From Hell, V for Vendetta, and Watchmen, for which he won the Hugo Award. He was born in 1953 in Northampton, UK, and has lived there ever since.