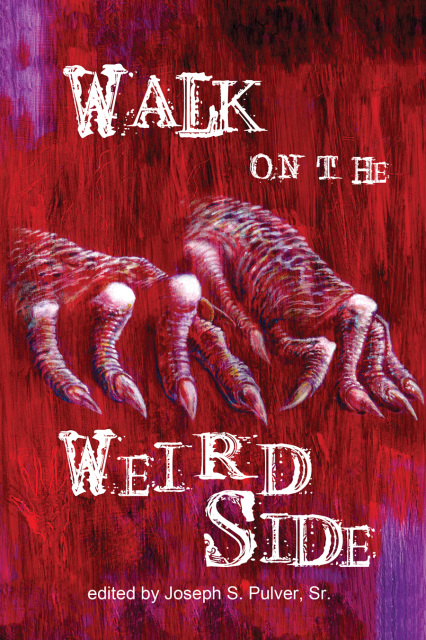 Walk on the Weird Side - A NecronomiCon 2017 Anthology

﻿Walk on the Weird Side - a 254-page anthology of weird fiction, fantasy, and horror to benefit the NecronomiCon Providence and the Lovecraft Arts & Sciences Council. Edited by veteran editor of the Weird Joseph S. Pulver, Sr. This collection features the work of both veterans and up-and-coming names of the contemporary Weird it is a perfect collection for those looking to delve deeper into the world of the Weird.

Do not be fooled, this is not a pure Lovecraftian anthology (yes, HPL’s influence is here, but it is only one, small spoke on the wheel of weird fiction), within, the writers stretch out and explore many facets of the weird.

Joseph S. Pulver, Sr. (1955 - 2020) was the author of the novels The Orphan Palace and Nightmare's Disciple, and many short stories that were published in various American small press magazines, foremost among them Robert M. Price’s Crypt of Cthulhu. His tales cover subjects ranging from Robert Wiene’s The Cabinet of Dr. Caligari to H. P. Lovecraft’s Cthulhu Mythos and Robert W. Chambers’ “King in Yellow.” His highly acclaimed short story collections, Blood Will Have Its Season, SIN & ashes, Portraits of Ruin, and A House of Hollow Wounds were published by Hippocampus Press. He edited the anthologies, A Season in Carcosa, The Grimscribe's Puppets (which won the Shirley Jackson Award for Best Edited Anthology), Cassilda's Song, and Walk on the Weird Side.