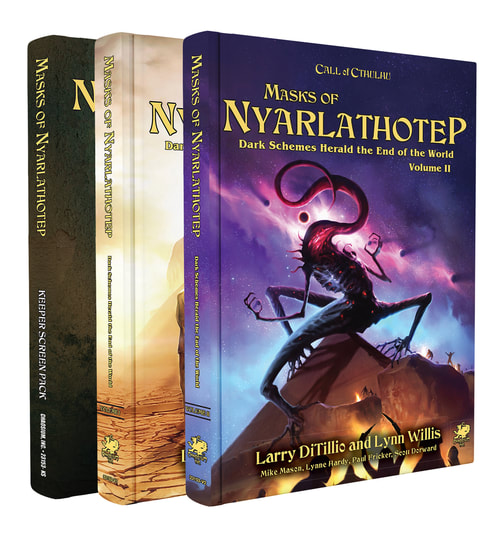 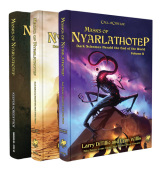 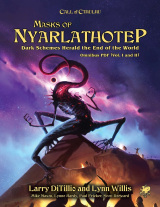 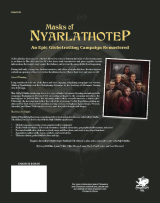 Dark Schemes Herald the End of the World

Reanimation of the classic Call of Cthulhu campaign.

The new edition of Masks of Nyarlathotep is a complete revision and updating of this epic multi-part campaign set in 1925, in which steadfast investigators must unravel secrets and battle the minions of darkness in an attempt to stop world-shattering events from destroying humanity.

Get the Stunning Slipcase Set!

Masks of Nyarlathotep has been comprehensively revised and updated for use with Call of Cthulhu 7th Edition, but may also be run with the Pulp Cthulhu supplement.

Requires the Call of Cthulhu Keeper’s Rulebook (7th edition) to play, and is optionally usable with Pulp Cthulhu.

The original six-chapter campaign featuring adventures in America, England, Egypt, Kenya, Australia, and China have been developed and updated by Mike Mason, Lynne Hardy, Paul Fricker, and Scott Dorward, and feature enhanced and new encounters, sub-plots, and on-point guidance for the Keeper.

Now written to be playable with either standard Call of Cthulhu or Pulp Cthulhu, the text guides the Keeper and allows for both gritty or action-packed pulp styles of play.

The Introduction chapter features a new foreword by Mask’s creator, Larry DiTillio, and goes on to provide an overview of the campaign, it’s key players and their goals and differing agendas, and the important locations the investigators will travel to while they seek to understand the mystery unfolding before them. Additional material looks at the dark god Nyarlathotep, his cults, and his role in the campaign. Guidance is also provided on running the campaign, including considerations of historical depictions, pulp or standard play styles, and lethality level (just how much danger should the investigators’ face). Rounding things out is plenty of advice on creating investigators for the campaign, replacement characters, and ten ready-to-play investigators for those wishing to dive straight into the adventure.

We have added Detailed New Appendices!

Running Masks of Nyarlathotep has never been easier thanks to these extensive appendices:

What are you waiting for? Go Save the World!

What the Critics Say About the New Edition:

"The long and short of it is this: the new version of Masks of Nyarlathotep is an extraordinarily well produced product in every way that you look at it. Not only is it gorgeously laid out and illustrated, but the content is going to make for some truly epic campaigns... However, beneath the bling is a solid and epic campaign clawing and writhing to escape into your players brains. It is full of fantastic stories and despite its at times, almost comically complicated webs of clues, I think it will be a delight to run. So much thought has gone into making sure the GM's job is as easy as possible."--YSDC.

"...this new edition of Masks will set the bar for roleplaying campaigns for some time to come... the new Masks of Nyarlathotep is everything that fans of Call of Cthulhu would want from an update of one of the most compelling RPG campaigns ever written. For players it will be a defining experience of what an RPG can be, offering an immersive, multi-faceted adventure into the heart of both cosmic and human darkness. For Keepers, the book is meticulously researched and provides all the resources and tips for running this holy grail of campaigns."--Games Vs Play.