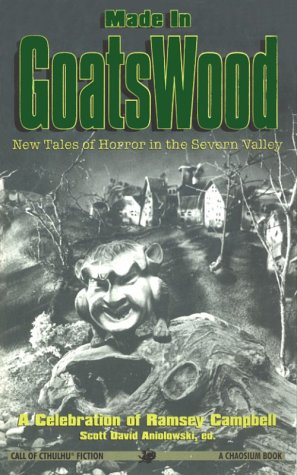 A Celebration of Ramsey Campbell. This volume contains all-new stories by seventeen admiring fellow authors. All the stories are set in that ancient and fearful portion of England's Severn Valley which Mr. Campbell evoked in narratives such as “The Moon-Lens” Included in this book is a new story by him, his first Severn Valley yarn in decades. Included are 18 stories, decorative map of the region, portrait of Ramsey Campbell, introduction by the editor.

Made in Goatswood ‚ interior artwork by Earl Geier

ii. Made in Goatswood (frontispiece)‚ interior artwork by Allen Koszowski

1. A Priestess of Nodens‚ short story by A. A. Attanasio

75. I Dream of Wires‚ short story by Scott David Aniolowski

91. The Turret‚ novelette by Richard A. Lupoff

211. The Music of the Spheres‚ short story by Kevin A. Ross

233. The Beard of Byatis‚ novelette by Robert M. Price

255. The Horror Under Warrendown‚ short story by Ramsey Campbell