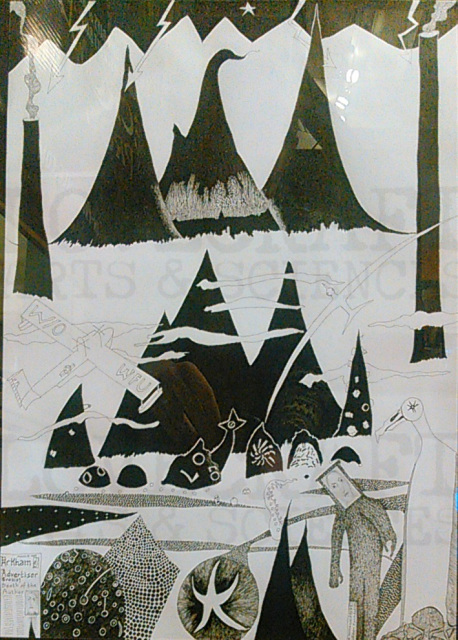 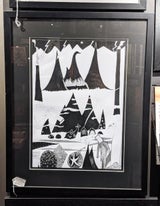 Nick Blinko, 2012 - At the Mountains of Madness (ink on paper, framed)

This is an ORIGINAL pen and ink drawing by British outsider artist Nick Blinko. Meticulously limned and ready to warp your sense of reality, this tribute to the ill-fated expedition documented by H. P. Lovecraft in "At the Mountains of Madness" is professionally framed and ready for display.

Nick Blinko was born in 1961. His band, Rudimentary Peni, whose records include Death Church, Cacophony, and Pope Adrian 37th, enjoy international acclaim in punk and avant-garde circles. A legendary figure in the “outsider art” scene, his paintings are exhibited across the world. He continues to write, paint, and make music in Black Langley, Hertfordshire, UK.

"In the case of British artist Nick Blinko, who has in the past been hospitalised, the need to make pictures is stronger than the desire for the psychic ‘stability’ brought by therapeutic drugs which adversely affects his ability to work. His images are constructed of microscopically detailed elements, sometimes consisting of literally hundreds of interconnecting figures and faces, which he draws without the aid of magnifying lenses and which contain an iconography that places him in the company of the likes of Bosch, Bruegel and the late Goya. These pictures produced in periods when he was not taking medication bring no respite from the psychic torment and delusions from which he suffers. In order to make art, Blinko risks total psychological exposure." -Colin Rhodes . ‘Outsider Art : Spontaneous Alternatives’, Thames & Hudson

Please note that actual shipping charge will be determined by your shipping address and shipping carrier, and could vary from what is automatically calculated at checkout. For purchases outside of the United States, interested parties should contact us for information on shipping cost.