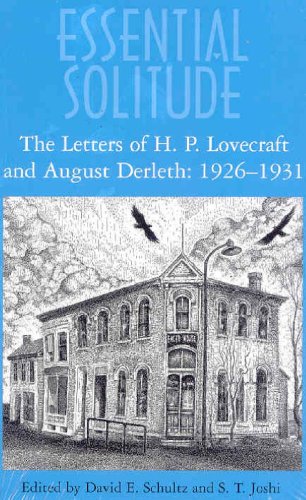 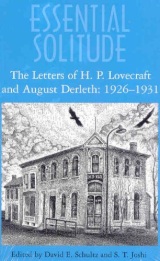 In the first volume of the letters of H. P. Lovecraft and August Derleth, Lovecraft’s relations to one of his most prominent colleagues and disciples, August Derleth (1909–1971), are recounted in the hundreds of letters they exchanged beginning in 1926. The youthful Derleth first wrote to Lovecraft, via Weird Tales magazine, in regard to an obscure work of weird fiction, and their subsequent correspondence deals extensively with the history of weird fiction, the two authors’ ongoing attempts to publish stories in pulp magazines, Derleth’s evolution into a sensitive writer of regional fiction and of detective stories, and debates over such issues as spiritualism, occultism, the literary use of coincidence, points of language and style, and other matters.

Especially noteworthy are several letters by Lovecraft that Derleth interpreted as giving him permission to elaborate upon Lovecraft’s pseudomythology, which Derleth named the “Cthulhu Mythos.” All the letters are exhaustively annotated by David E. Schultz and S. T. Joshi.

In this second volume, Lovecraft and Derleth—now noted luminaries in Weird Tales and the world of pulp magazines—continue to write letters on an almost weekly basis. Lovecraft, however, is plagued with self-doubt as a result of the rejection of At the Mountains of Madness by Weird Tales and other professional setbacks.

Meanwhile, Derleth is beginning to make a name for himself in the realm of detective fiction with the creation of Solar Pons; he has also begun sensitive mainstream writing that is finding placement in prestigious little magazines of the period. Derleth himself surreptitiously submitted Lovecraft’s “The Shadow over Innsmouth” and “The Dreams in the Witch House” to Weird Tales; the former was rejected, the latter accepted. In all, Lovecraft wrote nearly 400 letters to Derleth, but only about 40 of Derleth’s letters to Lovecraft survive.

All the letters are exhaustively annotated by David E. Schultz and S. T. Joshi.