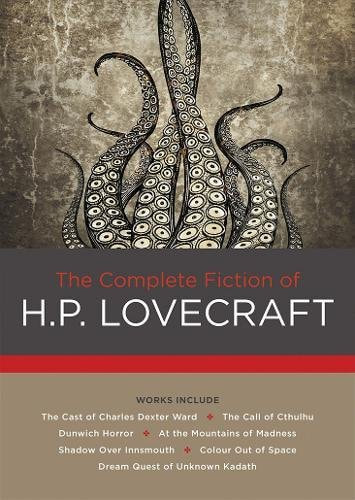 The Complete Fiction of H. P. Lovecraft collects the author's novel, four novellas, and fifty-three short stories. Written between the years 1917 and 1935, this collection features Lovecraft's trademark fantastical creatures and supernatural thrills, as well as many horrific and cautionary science-fiction themes, that have influenced some of today's important writers and filmmakers, including Stephen King, Alan Moore, F. Paul Wilson, Guillermo del Toro, and Neil Gaiman.

Included in this volume are The Case of Charles Dexter Ward, "The Call of Cthulhu," "The Dream-Quest of Unknown Kadath," "At the Mountains of Madness," "The Shadow Over Innsmouth," "The Color Out of Space," "The Dunwich Horror," and many more hair-raising tales in an affordable hardcover edition.

H. P. Lovecraft was born in 1890 in Providence, Rhode Island, where he lived most of his life. Frequent illnesses in his youth disrupted his schooling, but Lovecraft gained a wide knowledge of many subjects through independent reading and study. He wrote many essays and poems early in his career, but gradually focused on the writing of horror stories, after the advent in 1923 of the pulp magazine Weird Tales, to which he contributed most of his fiction. His relatively small corpus of fiction has nevertheless exercised a wide influence on subsequent work in the field, and he is regarded as the leading twentieth-century American author of supernatural fiction. H. P. Lovecraft died in Providence in 1937.