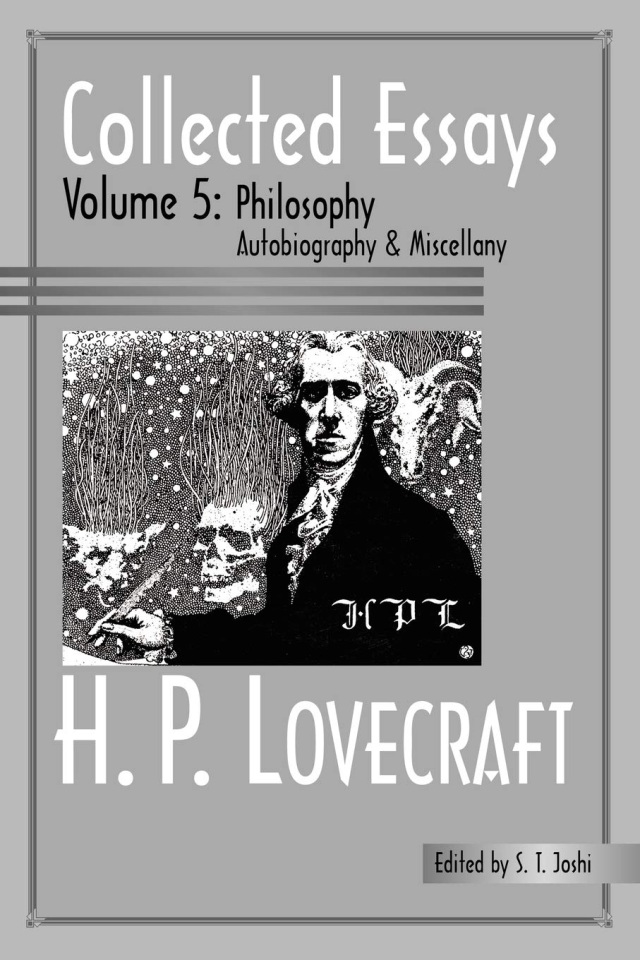 In this fifth and final volume of Lovecraft’s Collected Essays will be found a rich vein of Lovecraft’s philosophical writings. A lifelong student of metaphysics, ethics, aesthetics, and other branches of philosophy, Lovecraft early declared himself a forthright materialist and atheist, and defended his views in numerous controversies with colleagues.

Such essays as “Idealism and Materialism—A Reflection” and the In Defence of Dagon essays outline the essentials of Lovecraft’s philosophical thought, including such issues as free will, the improbability of theism, and cosmic pessimism. In his later years the problems of politics and economics came to the forefront of his attention, and in the essays “Some Repetitions on the Times,” “A Layman Looks at the Government,” and the unpublished “The Journal and the New Deal” Lovecraft vigorously argues for a moderate socialism to relieve the widespread unemployment brought on by the Depression.

The problem of art in the modern age also concerned Lovecraft, and in the unpublished essay “A Living Heritage: Roman Architecture in Today’s America” Lovecraft condemns modern “functionalist” architecture as inherently ugly and the product of sterile theory. This volume also contains Lovecraft’s autobiographical essays, including the delightful “A Confession of Unfaith,” telling of his shedding of religious belief, and the piquant “Cats and Dogs,” in which cats stand as sybols for the abstract beauty of a boundless cosmos.

All texts are extensively annotated, with critical and bibliographical notes, by S. T. Joshi.