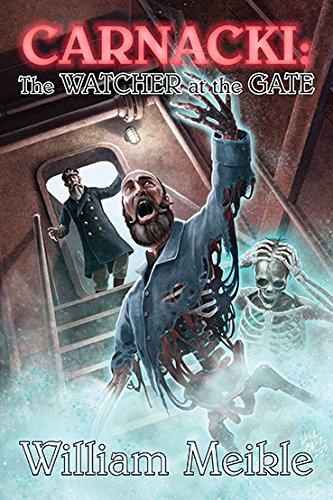 Carnacki: The Watcher at the Gate

Carnacki: The Watcher at the Gate collects twelve original short stories by William Meikle, with William Hope Hodgson’s supernatural detective at the center. Each story revolves around a dire situation: an imperiled individual calls upon the unusual expertise of Carnacki to get to the bottom of the occult goings-on and expertly banish the evil back to the Outer Darkness.

Carnacki operates in shadowy occult realms, on the fringes, in places out of sight and out of mind of normal everyday people. But sometimes the darkness touches the lives of these ordinary folks, and they find they need help - the kind of help that only Carnacki can provide.

In "Mr. Churchill's Dilemma" and "The Watcher at the Gate": Carnacki is called on to help a young Winston Churchill in defeating a menace from the east that threatens hostilities in the years before WWI, and in overseeing an experiment that threatens to expose the whole of South East England to an entity from the Outer Darkness. In "Captain Gault's Nemesis," "The Blue Egg" and "The Gray Boats," Carnacki aids another Hodgson character, the aforesaid Captain, in ridding his vessel of an ancient cursed box, in the procurement of a great Arabian gem, and in the salvage of a nautical government experiment gone disastrously wrong.

Hodgson’s concept of the Outer Darkness is inimical and uncaring of the ways of man, and several of these new stories expand on that idea and cross into a territory that could also be considered Lovecraftian, where eldritch beings fight and strain at the boundaries of our existence and only Carnacki can stand against the darkness and the destruction of our reality!

William Meikle is a Scottish writer living in Canada, with over thirty novels published in the genre press and over 300 short story credits in thirteen countries. Meikle has had books published with a variety of publishers including Dark Regions Press, DarkFuse and Severed Press, and his work has appeared in a number of professional anthologies and magazines.