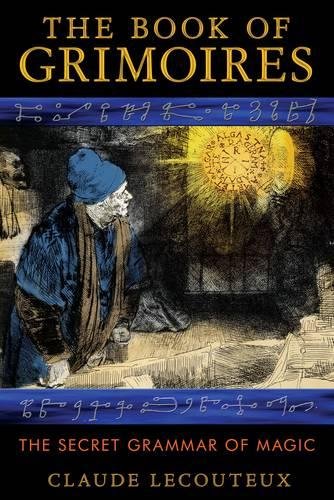 The Book of Grimoires: The Secret Grammar of Magic

• Includes spells, talisman formulations, and secret magical alphabets reproduced from the author’s private collection of grimoires, with instructions for their use

• Explains the basic principles of medieval magic, including the doctrine of names and the laws of sympathy and contagion

• Offers an overview of magic in the Western Mystery tradition

Grimoires began simply as quick-reference “grammar books” for sorcerers, magicians, and priests before evolving into comprehensive guides to magic, complete with spell-casting rituals, magical alphabets, and instructions to create amulets and talismans. With the advent of the printing press, some grimoires were mass produced, but many of the abbreviations were misinterpreted and magical words misspelled, rendering them ineffective. The most powerful grimoires remained not only secret but also heavily encoded, making them accessible only to the highest initiates of the magical traditions.

Drawing on his own private collection of grimoires and magical manuscripts as well as his privileged access to the rare book archives of major European universities, Claude Lecouteux offers an extensive study of ancient books of magic and the ways the knowledge within them was kept secret for centuries through symbols, codes, secret alphabets, and Kabbalistic words. Touching on both white and black magical practices, he explains the basic principles of medieval magic, including the doctrine of names and signatures, mastery of the power of images, and the laws of sympathy and contagion. He gives an overview of magic in the Western Mystery tradition, emphasizing both lesser-known magicians such as Trithemus and Peter of Apono and famous ones like Albertus Magnus and Hermes Trismegistus.

Creating a universal grimoire, Lecouteux provides exact reproductions of secret magical alphabets, symbols, and glyphs with instructions for their use as well as an illustrated collection of annotated spells, rituals, and talismans for numerous applications including amorous magic, healing magic, and protection rites. The author also examines the folk magic that resulted when the high magic of the medieval grimoires melded with the preexisting pagan magic of ancient Europe.

Author Claude Lecouteux is a former professor of medieval literature and civilization at the Sorbonne. He is the author of numerous books on medieval and pagan afterlife beliefs and magic, including The Book of Grimoires, Dictionary of Ancient Magic Words and Spells, and The Tradition of Household Spirits. He lives in Paris.