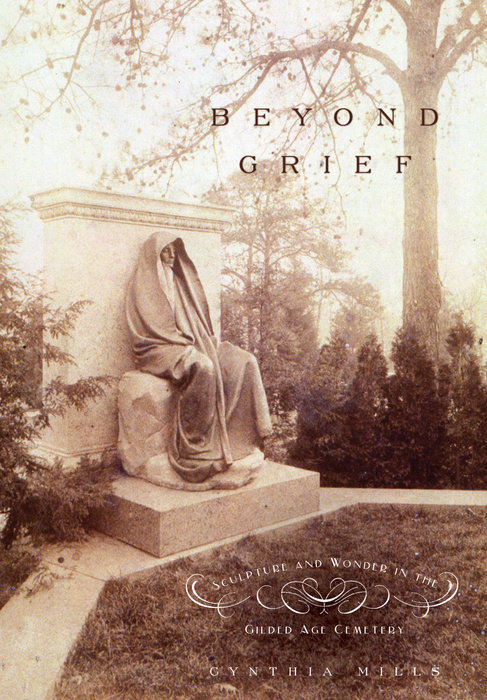 Beyond Grief: Sculpture and Wonder in the Gilded Age Cemetery

Beyond Grief explores high-style funerary sculptures and their functions during the turn of the twentieth century. Many scholars have overlooked these monuments, viewing them as mere oddities, a part of an individual artist's oeuvre, a detail of a patron's biography, or local civic cemetery history. This volume considers them in terms of their wider context and shifting use as objects of consolation, power, and multisensory mystery and wonder. Art historian Cynthia Mills traces the stories of four families who memorialized their losses through sculpture.

Henry Brooks Adams commissioned perhaps the most famous American cemetery monument of all, the Adams Memorial in Washington, D.C. The bronze figure was designed by Augustus Saint-Gaudens, who became the nation's foremost sculptor. Another innovative bronze monument featured the Milmore brothers, who had worked together as sculptors in the Boston area.

Artist Frank Duveneck composed a recumbent portrait of his wife following her early death in Paris; in Rome, the aging William Wetmore Story made an angel of grief his last work as a symbol of his sheer desolation after his wife's death.

Through these incredible monuments, Mills explores questions like: Why did new forms--many of them now produced in bronze rather than stone and placed in architectural settings--arise just at this time, and how did they mesh or clash with the sensibilities of their era? Why was there a gap between the intention of these elite patrons and artists, whose lives were often intertwined in a closed circle, and the way some public audiences received them through the filter of the mass media? Beyond Grief traces the monuments' creation, influence, and reception in the hope that they will help us to understand the larger story: how survivors used cemetery memorials as a vehicle to mourn and remember, and how their meaning changed over time.

In this posthumously published work, Mills brings together a variety of threads to examine the nature of mourning and monumentality in the US from the 1880s to WW I. She focuses on several elite Eastern families, such as Henry and Clover Adams and William and Emelyn Story and their social networks in the US and abroad, to provide a context for the dissemination of "high-style" art in cemetery memorials during the period. The family tragedies of the deaths of spouses are background for the discussion of memorial art. Focusing on the work of such sculptors as Augustus Saint-Gaudens, Daniel Chester French, and Frank Duveneck, the author delves into their relationships to these families, their reception in both memorial art and high art, and subsequent influence and imitation.

Author Cynthia Mills was historian emeritus at the Smithsonian American Art Museum, where she served as executive editor of the scholarly journal American Art and academic programs advisor. She was co-editor of the anthology Monuments to the Lost Cause: Women, Art, and the Landscapes of Southern Memory (2004) and East-West Interchanges in American Art: A Long and Tumultuous Relationship (2012). Her essays and lectures focused on American sculpture in the late nineteenth century.