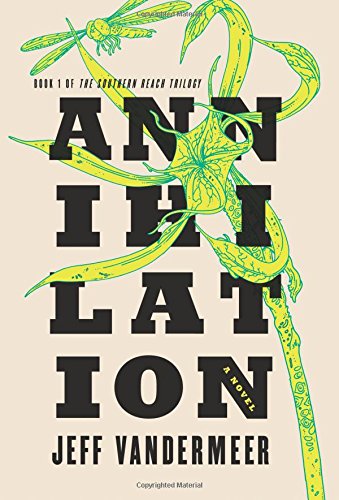 The Southern Reach Trilogy begins with this Nebula Award-winning novel that "reads as if Verne or Wellsian adventurers exploring a mysterious island had warped through into a Kafkaesque nightmare world" (Kim Stanley Robinson).

Area X has been cut off from the rest of the continent for decades. Nature has reclaimed the last vestiges of human civilization. The first expedition returned with reports of a pristine, Edenic landscape; the second expedition ended in mass suicide; the third expedition in a hail of gunfire as its members turned on one another. The members of the eleventh expedition returned as shadows of their former selves, and within weeks, all had died of cancer. In Annihilation, the first volume of Jeff VanderMeer's Southern Reach trilogy, we join the twelfth expedition.

"An expedition of four women is sent into an unknown region called Area X, beyond the borders of humanity: a psychologist, a surveyor, an anthropologist, and our narrator, a biologist. The purpose of the mission is to collect data about Area X and report back to the government, the Southern Reach, but circumstances begin to change when the group discovers a tower (or tunnel) that was previously unmarked on the map. Inside the structure, strange writing scrawls across the walls, and a spiral staircase descends downward, beckoning the members to follow. Previous expeditions ended badly, with group members disappearing or returning as shells of their former selves, but little is known about what actually occurred on those trips to Area X. A gripping fantasy thriller, Annihilation is thoroughly suspenseful. In a manner similar to H. G. Wells’ in The Island of Dr. Moreau (1896), VanderMeer weaves together an otherworldly tale of the supernatural and the half-human. Delightfully, this page-turner is the first in a trilogy. " — Heather Paulson