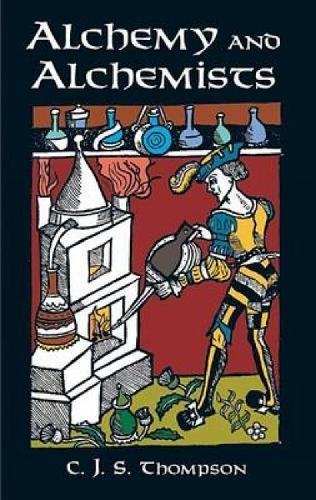 Alchemy, whose beginnings — possibly in Egypt, Babylon, India, or China — are ancient and obscure, remained undocumented until about 2500 BC. Although it may have originated with metallurgy, the practice rapidly developed an association with magic, pharmacy, and astrology. In this richly illustrated and amply researched study, a noted expert traces the long history of alchemy, from its murky start to modern times.

Hermes Trismegistus and other famous alchemists appear here, along with discussions of the craft's associations with chicanery (as memorably portrayed in Ben Jonson's 1610 comedy, The Alchemist),

and its role in the secret society of Rosicrucians. Additional topics include the alchemist's laboratory and equipment, alchemical symbols and secret alphabets, noteworthy manuscripts, the influence of astrology, and more.

Although regarded today as a pseudoscience, alchemy gave rise to scientific chemistry. This volume illustrates the ways in which efforts to transmute metals — such as the search for the ever-elusive philosopher's stone — stimulated experimentation with hitherto untried substances, leading to improved knowledge of the materials vital to applied chemistry. Anyone intrigued by the origins and practices of this age-old and still-mysterious discipline, as well as those interested in the history of chemistry, will appreciate this concise, authoritative study.