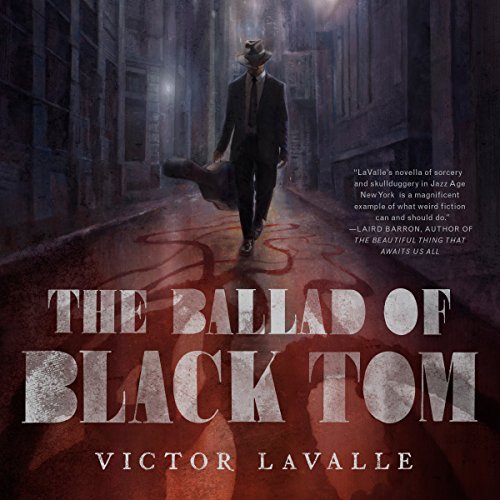 The Ballad of Black Tom

One of NPR 's Best Books of 2016, winner of the Shirley Jackson Award, the British Fantasy Award, the This is Horror Award for Novella of the Year, and a finalist for the Hugo, Nebula, Locus, World Fantasy, and Bram Stoker Awards

People move to New York looking for magic and nothing will convince them it isn't there. Charles Thomas Tester hustles to put food on the table, keep the roof over his father's head, from Harlem to Flushing Meadows to Red Hook. He knows what magic a suit can cast, the invisibility a guitar case can provide, and the curse written on his skin that attracts the eye of wealthy white folks and their cops. But when he delivers an occult tome to a reclusive sorceress in the heart of Queens, Tom opens a door to a deeper realm of magic, and earns the attention of things best left sleeping. A storm that might swallow the world is building in Brooklyn. Will Black Tom live to see it break?

"LaValle's novella of sorcery and skullduggery in Jazz Age New York is a magnificent example of what weird fiction can and should do." — Laird Barron, author of The Beautiful Thing That Awaits Us All

"LaValle reinvents outmoded literary conventions, particularly the ghettos of genre and ethnicity that long divided serious literature from popular fiction." — Praise for The Devil in Silver from Elizabeth Hand, author of Radiant Days

"LaValle cleverly subverts Lovecraft's Cthulhu mythos by imbuing a black man with the power to summon the Old Ones, and creates genuine chills with his evocation of the monstrous Sleeping King, an echo of Lovecraft's Dagon. The Ballad of Black Tom has a satisfying slingshot ending." — Elizabeth Hand for Fantasy & Science Fiction