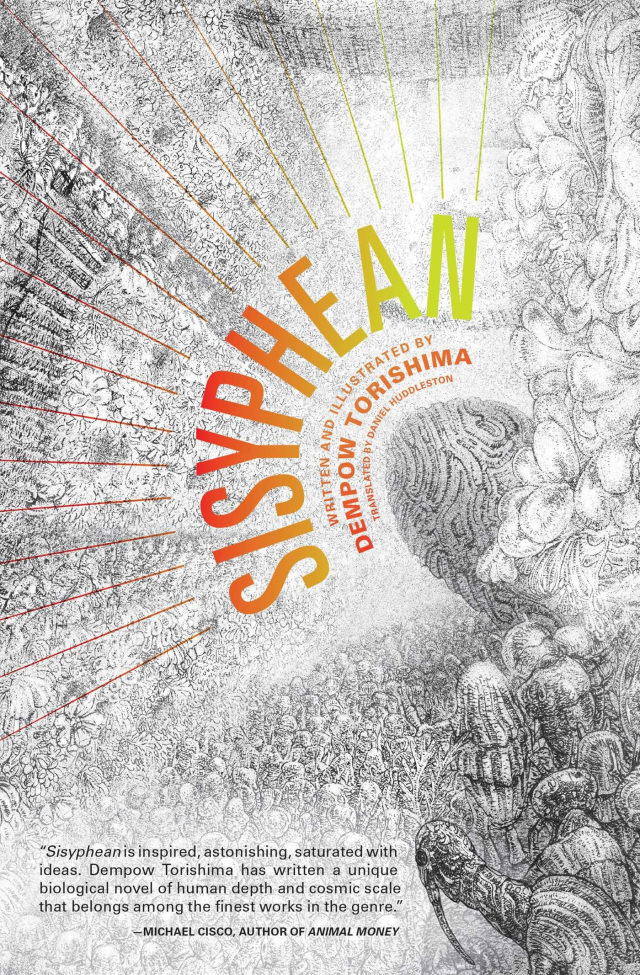 Even after the world and humanity itself have been rendered nearly unrecognizable by genetic engineering, a day in the office can feel…Sisyphean.

The company stands atop a tiny deck supported by huge iron columns a hundred meters high. The boss there is its president—a large creature of unstable, shifting form once called “human.” The world of his dedicated worker contains only the deck and the sea of mud surrounding it, and and the worker’s daily routine is anything but peaceful. A mosaic novel of extreme science and high weirdness, Sisyphean will change the way you see existence itself.

A strange journey into the far future of genetic engineering, and working life. After centuries of tinkering, many human bodies only have a casual similarity to what we now know, but both work and school continue apace. Will the enigmatic sad sack known only as “the worker” survive the day? Will the young student Hanishibe get his questions about the biological future of humanity answered, or will he have to transfer to the department of theology? Will Umari and her master ever comprehend the secrets of nanodust?

"Dempow Torishima's Sisyphean is stunning. A game-changer. Possibly the first truly visionary novel of this decade for SF."—Jeff VanderMeer, best-selling author of Annihilation.

"Torishima’s knotty, dense, hilarious, scary masterpiece is a book whose prose can be savored endlessly, and whose Kakaesque biopunk conceits prove that no strangeness which the universe can confer upon humanity will destroy the essential drives, loves and ambitions of the species.", Locus Online

﻿Dempow Torishima was born in Osaka. He graduated from Osaka College of Art and worked as a freelance designer and illustrator. He won the Sogen SF Short Story Prize with his debut fiction “Sisyphean” (Kaikin no to) in 2011. Since then, he has been writing a series of stories in the same far-future world of Sisyphean, which was published as Sisyphean and Other Stories in 2013. The book was chosen as the best SF of 2013 in SF Magazine, won the Japan SF Award, was nominated for the Seiun Award in 2014.