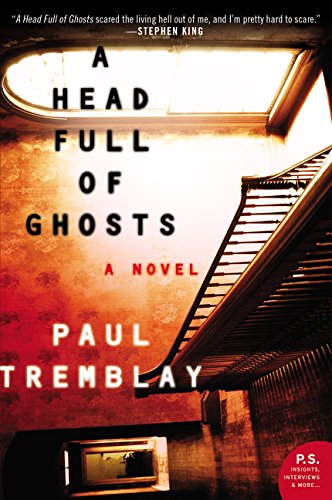 A Head Full of Ghosts

A chilling thriller that brilliantly blends psychological suspense and supernatural horror, reminiscent of Stephen King's The Shining, Shirley Jackson's The Haunting of Hill House, and William Peter Blatty's The Exorcist.

The lives of the Barretts, a normal suburban New England family, are torn apart when fourteen-year-old Marjorie begins to display signs of acute schizophrenia.

To her parents’ despair, the doctors are unable to stop Marjorie’s descent into madness. As their stable home devolves into a house of horrors, they reluctantly turn to a local Catholic priest for help. Father Wanderly suggests an exorcism; he believes the vulnerable teenager is the victim of demonic possession. He also contacts a production company that is eager to document the Barretts’ plight. With John, Marjorie’s father, out of work for more than a year and the medical bills looming, the family agrees to be filmed, and soon find themselves the unwitting stars of The Possession, a hit reality television show. When events in the Barrett household explode in tragedy, the show and the shocking incidents it captures become the stuff of urban legend.

Fifteen years later, a bestselling writer interviews Marjorie’s younger sister, Merry. As she recalls those long ago events that took place when she was just eight years old, long-buried secrets and painful memories that clash with what was broadcast on television begin to surface—and a mind-bending tale of psychological horror is unleashed, raising vexing questions about memory and reality, science and religion, and the very nature of evil.

“A Head Full of Ghosts scared the living hell out of me, and I’m pretty hard to scare.” (Stephen King)

“…progressively gripping and suspenseful ― (Tremblay’s) ultimate, bloodcurdling revelation is as sickeningly satisfying as it is masterful.” (NPR Books)

“Tremblay expertly ratchets up the suspense until the tension is almost at its breaking point.” (Kirkus Reviews)

“The novel is stylishly written and well-conceived.” (Booklist)

“Gripping and truly scary, this book feels of the moment in a way few thrillers do.” (B&N Reads)

Paul Tremblay is the author of the Bram Stoker Award and Locus Award winning THE CABIN AT THE END OF THE WORLD, winner of the British Fantasy Award DISAPPEARANCE AT DEVIL'S ROCK, and Bram Stoker Award/Massachusetts Book Award winning A HEAD FULL OF GHOSTS. A HEAD FULL OF GHOSTS is in development with Focus Features. He's also the author of the novels The Little Sleep, No Sleep till Wonderland, Swallowing a Donkey's Eye, and Floating Boy and the Girl Who Couldn't Fly (co-written with Stephen Graham Jones).