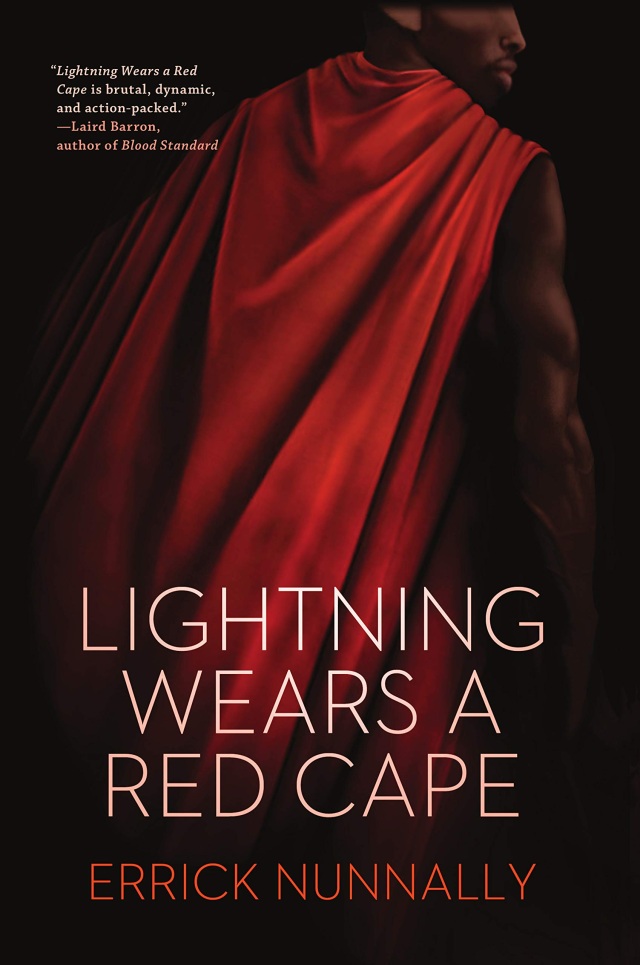 The Ace of Hearts, once poor and unknown, has used his power to wield influence over criminal organizations, key people in politics, law enforcement, and private industry. Along with his three super-human partners, they are in the final phases of a plan to become the power behind the power in several states. Shade, a civic-minded martial-artist trained on another world, and Atlas, a police officer with super-strength and the power of flight, discover the hard way that nothing is as it seems. They must avoid becoming pawns themselves and build a coalition in an environment where no one can be trusted and a self-proclaimed African god pursues a destructive vendetta against them all.

“Nunnally confronts the grittier aspects of the super-powered human genre and the result is a bruising thrill ride. Lightning Wears a Red Cape is brutal, dynamic, and action-packed, but it’s also an insightful glimpse into the hearts and souls of men and women gifted, or cursed, with the power of gods.” ―Laird Barron, author of Blood Standard

“With Lightning Wears a Red Cape, Errick Nunnally thunders into the superhero genre with an ensemble super-powered crime novel that combines dark drama, intimate character work, and breathless action. I hope this is just the beginning for the world Nunnally has created. An author with a bright future ahead of him!” ―Christopher Golden, New York Times bestselling author of Ararat and The Pandora Room

"Errick Nunnally perfectly captures and distills all that is good and right about the superhero genre with Lightning Wears a Red Cape. A very nearly perfect tale." ―James A. Moore, author of Avengers: Infinity

“Errick Nunnally’s novel is an action-filled world of god-like super-humans whose lives are complicated by their very human emotions. Filled with realistic action, a mix of ethnic characters that reflect the real planet we live on, I loved the movie created in my mind.” ―Linda D. Addison, author of How to Recognize a Demon Has Become Your Friend

Born and raised in Boston, Massachusetts, Errick Nunnally served one tour in the Marine Corps before deciding art school would be a safer―and more natural―pursuit. He remains distracted by art, comics, and genre novels. A designer by day, he earned a black belt in Krav Maga and Muay Thai kickboxing by night. His work has appeared in eFiction’s inaugural SciFi issue and in the anthologies Doorways to Extra Time, Wicked Seasons, Inner Demons Out, A Dark World of Spirits the Fey, After the Fall, and In Vein. Errick’s novel, Blood For the Sun, is currently in redevelopment along with its sequel. Lightning Wears a Red Cape is his first novel for CZP. He lives with his wife and children in Cumberland, Rhode Island.