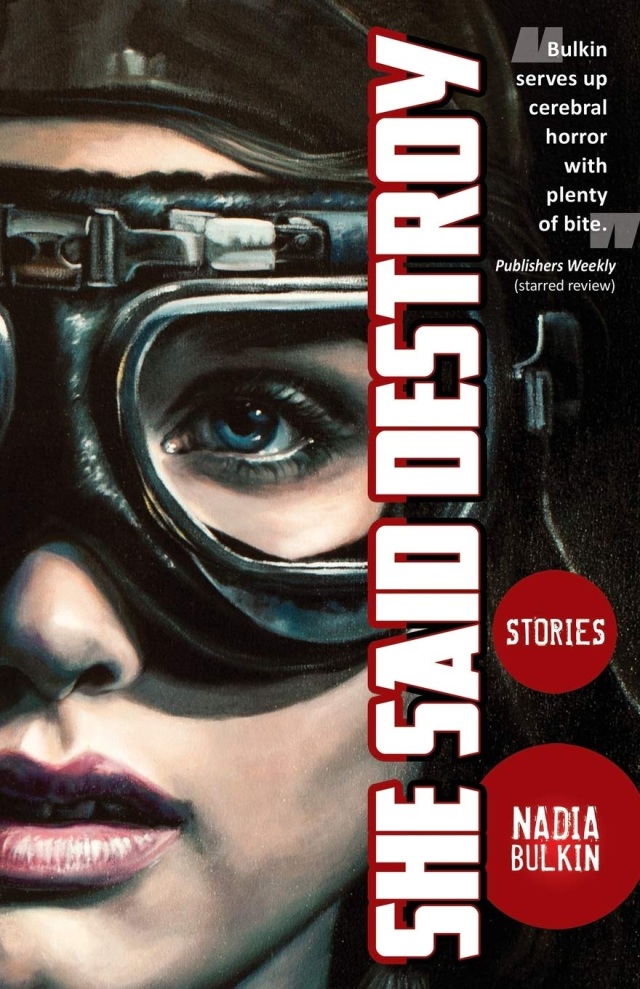 A dictator craves love--and horrifying sacrifice--from his subjects; a mother raised in a decaying warren fights to reclaim her stolen daughter; a ghost haunts a luxury hotel in a bloodstained land; a new babysitter uncovers a family curse; a final girl confronts a broken-winged monster...

"Weird fiction has been stuck in the era of new-fangled radio sets and fifteen-cent pulp magazines for ninety years. Finally, Nadia Bulkin has come to drag us kicking and screaming into the horrors of The Endless Now with a collection of hip, ultracontemporary, politically astute, and chilling stories." --Nick Mamatas, author of I Am Providence and The Last Weekend

"An expert balance of the fantastic and horrific, She Said Destroy is a prime example of how modern fabulism continues to reinvigorate and reinvent all modes of speculative fiction. This book is inventive, insightful, and inspiring, not to mention unnerving. The stories inside deftly blend the horrors of the cosmic with those of the personal, evoking awe both terrifying and sublime. Nadia Bulkin's writing is beautiful, exciting, and a stellar contribution to the field of fantastic literature." --Simon Strantzas, author of Burnt Black Suns

"I've been telling people about Nadia Bulkin since the moment I read the first short story of hers I ever ran across, 'Intertropical Convergence Zone, ' and apparently, this sets me apart from exactly no one. Which is only as it should be--Nadia is the coming storm, a 21st-century baby whose particular brand of politicalpunk witchcraft should determine the way the wind blows over horror's next few decades. She's exactly the sort of fabulist we most deserve, especially in this potentially catastrophic era... one who casts a cold, assessing eye over the wreckage before cobbling it together into the image of some loathsome new god, the kind that runs on blood worship and drunken karmic nihilism. And when we're all down in the mud crying and cutting each other like good little cultists, pinned flat by the weight of her shadow, I can only aspire to be the first to admit we did this to ourselves." --Gemma Files, author of Experimental Film

"The dark stories of She Said Destroy are harrowing, astute tales of horror and the fantastic, vagabond journeys through the regions and classes of today's world, alongside the forgotten and the monstrous. Bulkin's craft is an enlivening, challenging, and distinctive voice that lingers long after reading, and reshapes weird fiction each time. --Andrew S. Fuller, author, editor Three-lobed Burning Eye magazine

"Nadia Bulkin's unique, intelligent voice captured me the first time I read one of her stories. She's never let me down since!" --Paula Guran, editor of The Year's Best Dark Fantasy and; Horror

"Nadia Bulkin writes prose like a scalpel, deftly slicing to the beating hearts of her characters and the dilemmas they confront. Impressive in subject and setting, these stories range far and wide through literary and cultural history to find the darkness that threads through the (post) modern world. As substantial a debut as I've seen, and highly recommended." --John Langan, author of The Fisherman

Author Nadia Bulkin writes scary stories about the scary world we live in, three of which have been nominated for a Shirley Jackson Award. Her stories have been included in volumes of The Year's Best Horror (Datlow), The Year's Best Dark Fantasy and Horror (Guran) and The Year's Best Weird Fiction; in venues such as Nightmare, Fantasy, The Dark, and ChiZine; and in anthologies such as She Walks in Shadows (winner of the World Fantasy Award) and Aickman's Heirs (winner of the Shirley Jackson Award). She spent her childhood in Indonesia with a Javanese father and an American mother, then relocated to Nebraska. She has a B.A. in political science, an M.A. in international affairs, and lives in Washington, D.C.