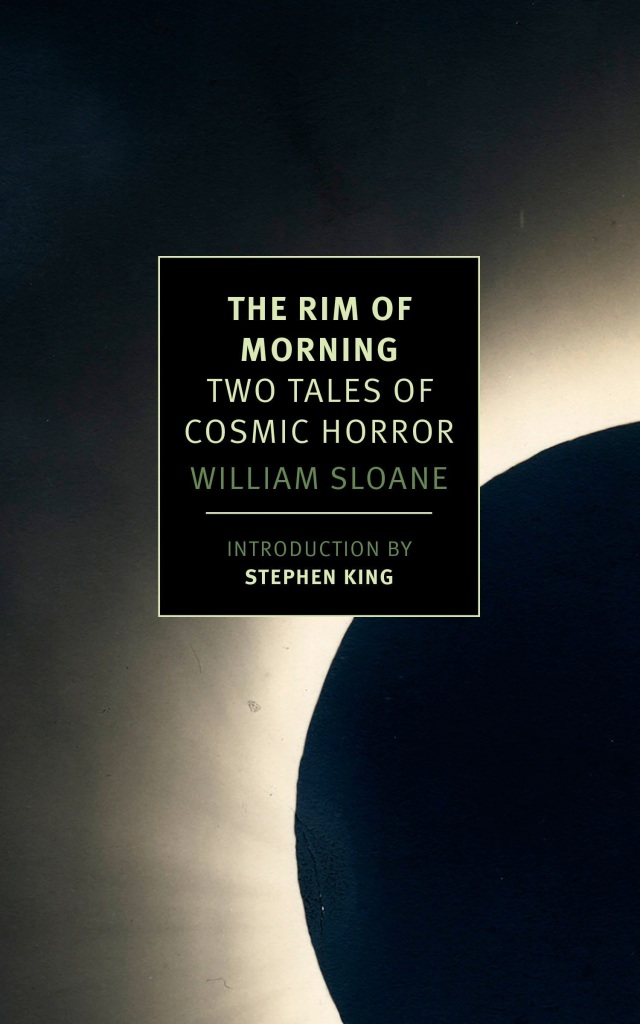 The Rim of the Morning

In the 1930s, William Sloane wrote two brilliant novels that gave a whole new meaning to cosmic horror. In To Walk the Night, Bark Jones and his college buddy Jerry Lister, a science whiz, head back to their alma mater to visit a cherished professor of astronomy. They discover his body, consumed by fire, in his laboratory, and an uncannily beautiful young widow in his house—but nothing compares to the revelation that Jerry and Bark encounter in the deserts of Arizona at the end of the book. In The Edge of Running Water, Julian Blair, a brilliant electrophysicist, has retired to a small town in remotest Maine after the death of his wife. His latest experiments threaten to shake up the town, not to mention the universe itself.

“‘To Walk the Night’ and ‘The Edge of Running Water’ are elegant and serenely paced, and they’re light on both the overt shocks of a King story and the overheated proses of a weird tale by Poe or Lovecraft; Sloane’s manner is patient, gentlemanly. What terrifies us, finally, in both these books is the vastness of our ignorance of the universe.” —Terry Rafferty, The New York Times Book Review

"Poised between the terrors of the old world and the quantum scientific leaps of the new, both novels are modern Promethean legends...Sloane pulls out all the stops to spin a diverting yarn, incorporating aspects of mystery, fantasy, science fiction, noir and horror, and yet his clear-eyed style is more immediate and far less mannered than the purple prose of that high priest of cosmic horror, H.P. Lovecraft.” --The Seattle Times

"The Sloane book is distinguished not only by the admiring introduction from Stephen King, but by the second novel in the book, The Edge of Running Water. Edge is one of the great American horror novels, mysteriously overlooked and still extremely effective in its blend of witty, realist dialogue and overwhelming cosmic horror....Sloane’s measured prose and gift for describing nature and the supernatural make The Edge of Running Water a work of realism in conflict with awe….I can’t overrate Sloane’s work in the pantheon of American horror.” —Naben Ruthnum, National Post

"As the editor of two SF anthologies and director of Rutgers University Press, Sloane would easily have made a name for himself in the speculative fiction world even if he had not written these two tremendous novels. Reprinted for the first time in years, 'To Walk the Night' and 'The Edge of Running Water' blend SF and horror in a manner wholly unheard of when they were originally published in the 1930s….Sloane’s eerie, exquisitely descriptive prose is influenced by Gothic literature as well as contemporary scientific theory….These all-but-forgotten texts make excellent reading for any fan of classic SF or eldritch horror.” --Publishers Weekly, starred review

William Sloane (1906–1974) was born in Plymouth, Massachusetts. After graduating from Princeton University in 1929 he enjoyed modest success writing supernatural and fantasy dramas. By the end of the 1930s he had published his only two novels, To Walk the Night (1937) and The Edge of Running Water (1939). During the 1950s he edited two science-fiction anthologies, Space, Space, Space: Stories About the Time When Men Will Be Adventuring to the Stars (1953) and Stories for Tomorrow (1954). Sloane taught at the Bread Loaf Writers’ Conference for more than twenty-five years and was responsible for inviting many notable writers, including John Williams and John Ciardi, to join the faculty. In 1983 a collection of his Bread Loaf lectures was published as The Craft of Writing. For much of his career Sloane held numerous editorial positions, including a stint at his own publishing house, and from 1955 until his death he was the managing director of Rutgers University Press.