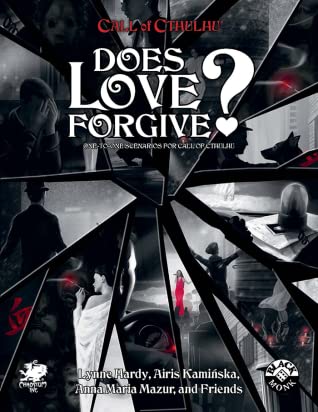 Does Love Forgive? is a collection of two special scenarios for Call of Cthulhu for one Keeper and one player. Both adventures are perfect for a fun evening of gaming for two people. Each scenario can be played over the course of one to two sessions, and is suitable for Keepers of all experience levels.

Love You to Death

Chicago: February 15th, 1929. It’s a cold winter’s day when the investigator’s good friend Hattie May appears in their office at the detective agency. Her beloved pet dog, Highball, is scheduled to be destroyed later today and she needs the investigator’s help getting him back from the Chicago Police Department. It doesn’t sound like too difficult a task, does it?

New York: September, 1932. The investigator, together with their two close friends Anna Konrad and Lucas Reston, has been invited to a party at wealthy—and notorious—socialite Madame de Tisson’s swanky apartment on the Upper West Side. Anna is somewhat distracted by her audition tomorrow for Nancy Turner, the famous jazz orchestra conductor. What is the link between the audition and a mysterious parcel that arrives the next day? And, why do so many people seem to be interested in the contents of the parcel?

Based on Miłość ci wszystko wybaczy? by Airis Kamińska and Anna Maria Mazur, published for the Polish version of Call of Cthulhu in February 2020 by Black Monk Games.

What the Critics Say

"A very welcome addition to the way in which Call of Cthulhu can be played and hopefully the format will be supported with further scenarios, if not a campaign!"--Reviews from R'lyeh.

"Both scenarios in Does Love Forgive? revolve around deep relationships and emotions (ye gods, what would Lovecraft think?) which don’t usually involve themselves in Call of Cthulhu games often, much less as a focal point. This is not meant as a discouragement to play them in the least. Give this collection a shot. I think they provide a different, entertaining, and very rewarding change from focusing on not getting tentacled to death."--Never Read the Latin.