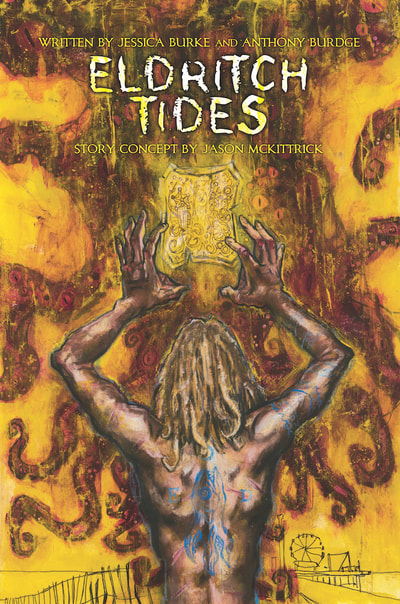 “Storms, and Nature as a whole, reveal over time what has long been buried and should have never been found.” – Dr. Gilbert Halsey, Toms River Psychiatric Unit

A long-forgotten artifact, churned up by the storm, washed ashore to be discovered by a fledgling cultist Jeremiah Allen. The knowledge revealed to him by the Elder Tablet Jeremiah followed in the footsteps of his ancestors as he pursued the dark magicks contained therein. After his evaluation of Jeremiah seven years later, the attending psychiatrist at Toms River Psychiatric Unit, Dr. Gilbert Halsey contacted an old friend at Miskatonic University. When Dr. Nora Danforth heard, and saw the news, she agreed to travel to Tom’s River to investigate The Elder Tablet.

With little knowledge of what he was doing, Jeremiah uses the tablet to wake what can only be described as “…a hideous, luminous giant of viscous jet black protoplasmic mass, and iridescent eyes…”