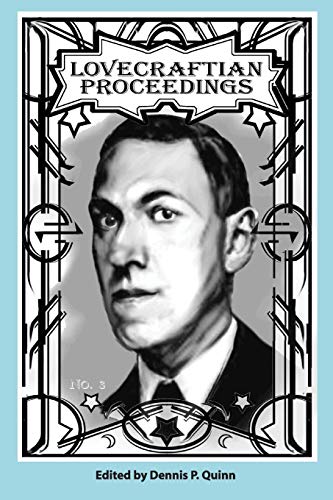 This third collection, like the previous two, contains the most novel and cutting-edge scholarship in Lovecraftiana, taking familiar topics down unfamiliar paths, amply demonstrating that H. P. Lovecraft's work has more resonance in modern culture than ever before. All in all, a bumper crop of criticism and analysis that will appeal to academics and Lovecraft's most erudite fans alike!

Lovecraftian Proceedings is the Official Organ of the Dr. Henry Armitage Memorial Symposium. Established in 2013 as a key part of NecronomiCon Providence, the Armitage Symposium fosters exploration of Lovecraft as a rationalist who created an elaborate cosmic mythology, and how this mythology was influenced by, and has come to influence, numerous other authors and artists.

Lovecraft’s Dark Continent: At the Mountains of Madness and Antarctic Literature

Alexander Blok and H. P. Lovecraft: On the Mythopoetics of the Supernatural

At the Mountains of Mars: Viewing the Red Planet through a Lovecraftian Lens

Stages of the Spiral: Lovecraft’s Descent into the Maelstrom

H. P. Lovecraft and the Dynamics of Detective Fiction

Lovecraft out of Space: Echoes of American Weird Fiction on Brazilian Literature and Cinema

Naming the Unnamable: Lovecraft’s Return of the Text

Correlating the Contents of Lovecraft’s Closet

Lovecraft Meets the Mummy: Orientalism, Race, and Monstrous Egypt in “Imprisoned with the Pharaohs” and “Out of the Aeons”

The Cosmic Drone of Azathoth: Adapting Literature into Sound