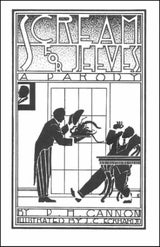 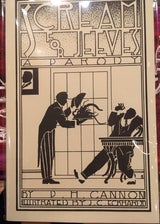 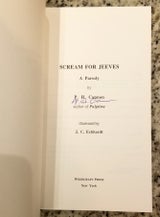 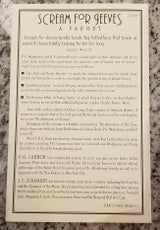 Scream For Jeeves: A Parody

P. G. Wodehouse and H. P. Lovecraft never crossed paths in their lifetimes, and yet in some ideal realm of the spirit these two geniuses — one of humor, one of horror — might have pooled theirs pens to produce such tales as:

"Cats, Rats, and Bertie Wooster" in which the intrepid Jeeves and his master leave London for Anchester in order to investigate the spectral doings at Exham Priory;

"Something Foetid," in which the pair, during a New York sojourn, find themselves involved with a reclusive Spanish doctor with a fondness for cool air;

"The Rummy Affair of Young Charlie," in which they go to Paris on Aunt Agatha's orders to keep an eye on that oddball antiquarian scholar, Charles Dexter Ward.

Since both authors admired Arthur Conan Doyle, creator of Sherlock Holmes, it comes as no surprise that in this last episode Bertie and Jeeves resort to enlisting the aid of one "Mr. Altamont of Chicago."

Rounding out the volume is a lengthy commentary, "The Adventure of the Three Anglo-American Authors: Some Reflections on Conan Doyle, P.G. Wodehouse, and H. P. Lovecraft."

What P. D. Q. Bach has done for classical music, what Roy Lichtenstein has done for modern painting, P. H. Cannon had done for Lovecraft and Wodehouse and Doyle (and others) in this affectionate literary spoof.

P. H. Cannon (Peter Cannon) is the author of Pulptime (1984), a Sherlock Holmes pastiche in which H. P. Lovecraft plays Dr. Watson to the great detective; Scream for Jeeves: A Parody (1994), a blend of Wodehousian humor and Lovecraftian horror with a dash of Conan Doyle; and The Lovecraft Chronicles (2004), a novel that imagines a happier and longer life for Lovecraft. He lives with his wife and three children in New York City.

J. C. Eckhardt (Jason C. Eckhardt) ] is an award-winning artist whose work appears on the covers for such publishers as Necronomicon Press, Hippocampus Press, and others. Recently, his work has been featured in the Annotated H. P. Lovecraft by Leslie Klinger and in Some Notes on a Nonentity: The Life of H.P. Lovecraft.